A rude and inappropriate credit card “tip” left for a waitress has gone viral after NBC Los Angeles reported the embarrassing tale of a man who visited Bamboo Thai Bistro in Redondo Beach, California.In place of a tip the customer wrote “Tip for US citizens only.”

The server, a 30-year-old woman, who holds a visa and is working legally, is working towards her green card. She hopes to eventually become a U.S. citizen and is working her tush off to support two children. This waitress was reportedly quite upset and “thought it was her fault, that maybe she did something wrong to offend him or something.”

A co-worker urged her to keep quiet about the incident, however, a photo of the receipt has surfaced on social media. 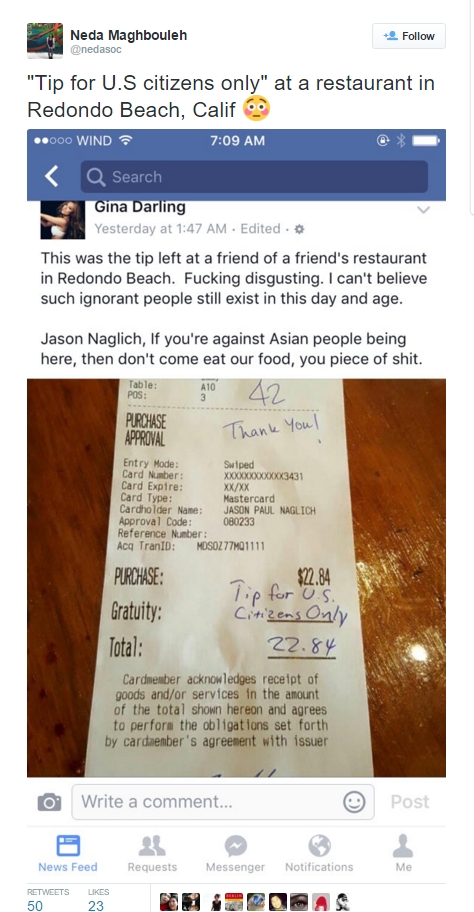 Needless to say, it has led to quite the furor online with one person tweeting “I hope his friends are Asian and post his address and number up. What a dick someone post a pic of this ass.” The picture surfaced on Twitter after being posted by a friend of the restaurant’s owner.

If this was someone’s way of making a point about immigration… maybe randomly sticking it to a waitress might not have been the best way of getting that across.

If you do something like this…you’re a douchebag! If you receive good service, the server DESERVES a tip!