What could have been the motive in this tragedy? 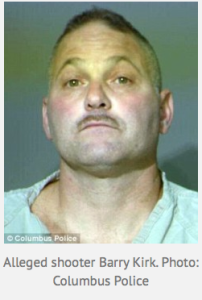 Crimefeed has more of the story…

A 7-year-old boy and his parents were shot and killed during some kind of home invasion in Columbus, Ohio on Monday evening around 5 pm. Police report that the boy’s 12-year-old sister was also shot, but she survived and is currently in critical condition. She’s expected to have a full recovery. A fifth person was also inside the house at the time, but was reportedly not injured.

According to ABC, police responded to a 911 call from inside the home by the 12-year-old girl. Other reports claim it was the wife who called 911 and reported an intruder inside the home who had shot her husband. According to the Daily Mail, neighbors reported hearing at least 20 shots fired.


Reports claim the shooter was actually a neighbor of the family, Barry Kirk, who lived across the street. When police arrived, the suspect, 50-year-old Kirk, was running away, and was subsequently shot by officers on the scene. He later died from his injuries.

Officials are still trying to determine a motive for the murders, though it’s believed the shooting was not random.

The deceased have been identified as John and Christina Anderson, ages 31 and 30, and their 7-year-old son Landon Anderson. The kids’ grandmother spoke to a local news channel and said she was “in denial” about the horrific incident, and that the couple had just gotten married recently.