It is clearly a violation of regulations, but should it be? 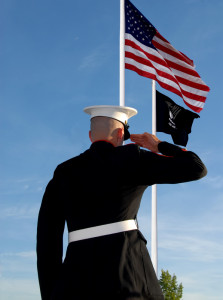 DailyCaller has the story:

A U.S. Marine singing the national anthem in full uniform in advance of a rally for GOP presidential candidate Donald Trump has drawn heated criticism for breaking regulations.

Cpl. Jason Perkins, a member of Marine Forces Reserve, sang the anthem before Trump’s speech in Birmingham. At the event, Trump said he was still considering an independent run, despite having signed a statement pledging not to do so.

The video of the event, which was posted on Facebook, received huge support, but some have questioned Perkins’ participation in a political event while in uniform. Department of Defense regulations state that although personnel are encouraged to participate in civic activities, doing so in full uniform is more than frowned upon because it gives the impression of Marine Corps endorsement.


A spokeswoman from the Marine Corps confirmed that Perkins ran afoul of the regulations.


Previous Video Of Rebel's Blowing Up Russia's Rescue Is Bad News For Obama, Here's Why