In response to parents’ concern over the safety of their children at least 40 Ohio school districts now allow teachers to have a gun in the classroom to use in defense of themselves and their students. 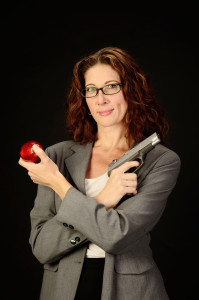 Breitbart has the story…

Teachers with concealed carry licenses can carry concealed guns in these 40 districts, after they undergo extended training.

According to WRKC, the teachers and administrators in these districts “train side by side with local law enforcement and paramedics at John Benner’s Tactical Defense Institute.” They train for the day they hope never arrives–the day in which an attacker like the one at Sandy Hook or Umpqua Community College walks on campus intent on taking as many innocent lives as possible.

Benner is “a former SWAT commander” who says he believes arming teachers was the way to go for quite some time, but districts and lawmakers could never quite be convinced. He said Sandy Hook changed everything. “Now people realize if you don’t have somebody in the school that’s armed, willing and capable you’re gonna lose a lot of people.”


One unidentified superintendent–who volunteered to be part of the training to help his teachers get certified to carry–said the days of calling 911 and enjoying and semblance of safety while waiting for police to arrive is over. He said, “When does help come? Every 30 seconds 2 people die. That’s not acceptable. I don’t know when the 911 call gets made. I don’t know when law enforcement arrives. It’s not that they don’t want to help but when do they help–and I want to keep my kids safe.”