The Bible, the U.S. Constitution and the Declaration of Independence are all sexist, according to a course approved by the Defense Department…

TruthAndAction has more of the story…

The Bible, the U.S. Constitution and the Declaration of Independence are all sexist, according to a course approved by the Defense Department.

In yet another assault on the fabric of our nation, these foundational documents are to blame for “historical influences that allowsexism to continue,” as stated in a presentation by the Defense Equal Opportunity Management Institute, a Department of Defense school out of Florida. 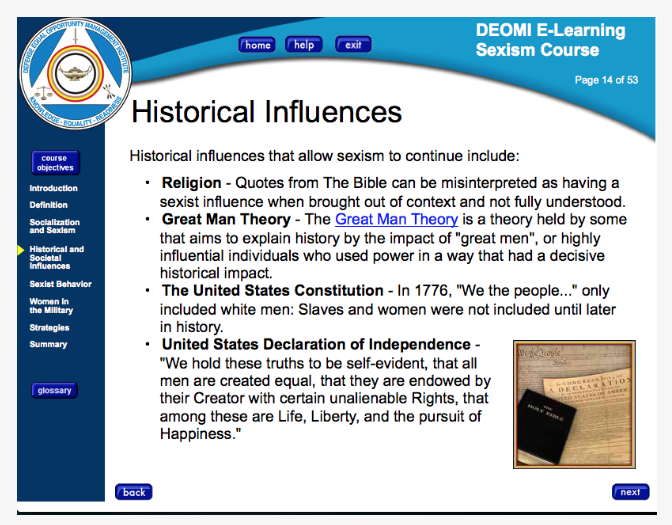 According to the course, the Bible has “quotes” which can be interpreted as sexist by readers.

The Declaration of Independence is also an historical cause of sexism, as the document refers only to “all men” — not “men and women.”

And the Constitution, the Pentagon argues, is an historical source of sexism because “slaves and women were not included until later in history.”

Of course, members of the Armed Forces take an oath to defend the Constitution — which is, according to the DEOMI course, an “historical influence that allows sexism to continue.”

“The content of the lesson is provided to generate academic discussion concerning how these historical documentshave been included in discussions about the topic of sexism,” Lt. Cmdr. Nate Christensen, a Defense Department spokesman, told The Daily Caller.

But following TheDC’s request for comment, the sexism course — as well as two other courses listed on DEOMI’s website, entitled “Prejudice & Discrimination” and “Racism” — were taken offline.

“This course is currently offline and under revision,” a notice says under all three courses. 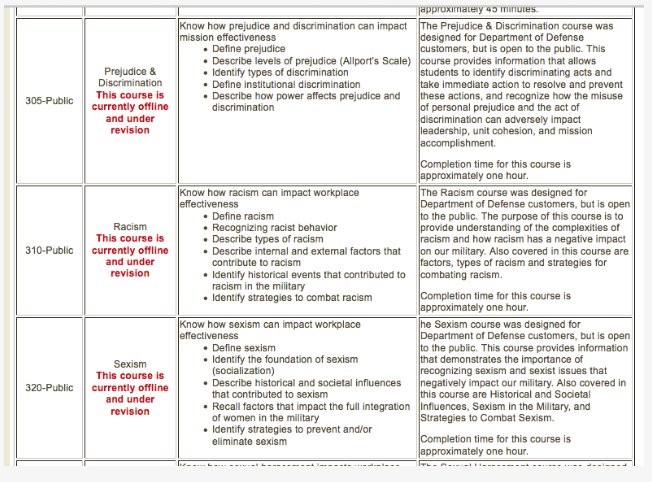 Asked about the sudden update, Christensen replied, “DEOMI online materials are periodically pulled to review to ensure accuracy and relevance. The racism, sexism and Prejudice & Discrimination are currently undergoing that review process.”

TheDC obtained copies of all three courses prior to their removal.

The “Prejudice & Discrimination” course was recently required for some Navy personnel who work in hospitals and clinics.

In the course, discrimination is divided into two categories: institutional and individual. Institutions can be a source of discrimination, as well as actions — or inaction — made by individuals.

Institutional discrimination, according to the DEOMI course, can be found in employment, education, housing and the military.

Examples of institutional discrimination in employment, according to DEOMI, are education requirements for employment:

The course teaches, “Individuals who have been segregated to inferior schools cannot find employment in businesses that hire according to specified credentials that inferior schools do not offer.”

Therefore, when employers institute education qualifications for prospective employees, they are engaging in a form of discrimination.

The DEOMI states more examples of institutional discrimination can be found in education: 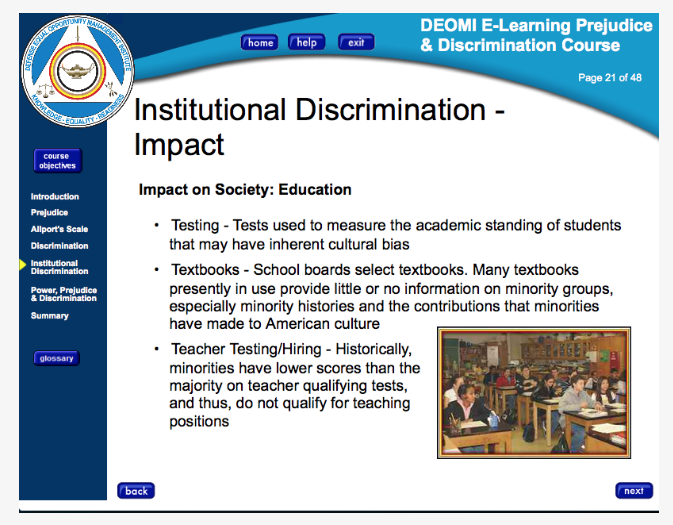 Academic tests “may have inherent cultural bias,” the presentation argues.

Textbooks also perpetuate discrimination since they “provide little or no information on minority groups, especially minority histories and the contributions that minorities have made to American culture.”

DEOMI teaches students that they can also contribute to discrimination on an individual level.

The presentation asserts individuals can perpetrate discrimination through both active and inactive ways, including “refusing to acknowledge one’s own privilege.” 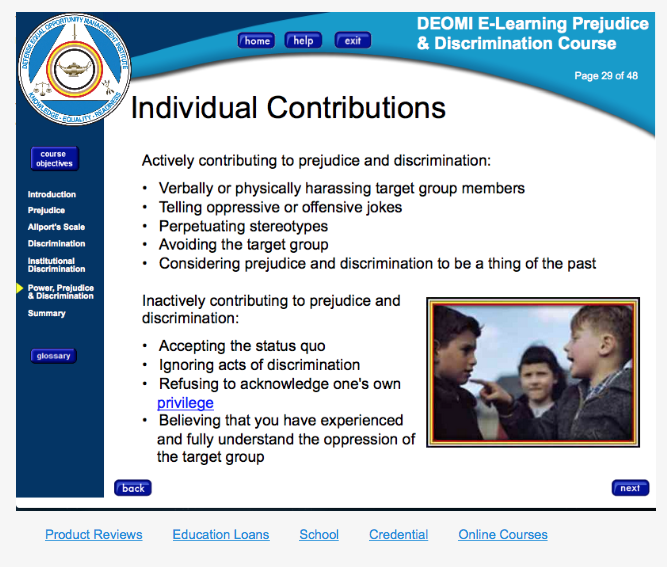 Next Black College Student Arrested After He Threatens Mass Violence On White Students.