Some support him, some despise him. What do you think?

A man with a rifle strapped to his back has been spotted walking around Akron, Ohio, this week.

Akron police don’t believe Daniel Kovacevic is a threat and because Ohio is an open carry state, he’s not breaking any laws. But his presence has stirred racial tensions in the community, according to The Cleveland Plain Dealer.

Akron is about a 45-minute drive to Cleveland where Tamir Rice, a black 12-year-old, was killed last year by police while holding a realistic toy gun.


“It’s different if it’s a black person. People say it isn’t, but it is,” 26-year-old Traneece Johnson told the Plain Dealer. “[Kovacevic] was approached, and they gave him a chance to speak and say he was expressing his right. The little boy didn’t get that chance.”

Kovacevic thanked people for “support and encouragement” on what appears to be his Facebook page. “At this point, I’m feeling a little overwhelmed. God bless,” Kovacevic wrote.

On Thursday, Kovacevic said, “I generally open carry a pistol when I am out and about, and these walks are no exception.” 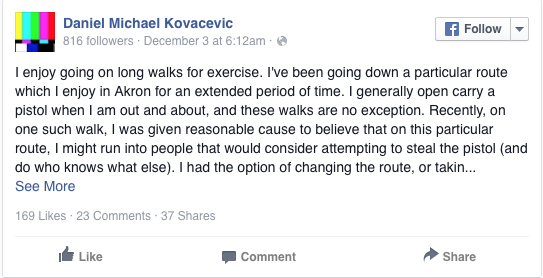 Next 'You Don't Have To Be A Lawyer To Create Your Own Gun Free Zone' - Hilarious!