This year, a very special little girl in New York is making a small request on our nation’s biggest holiday – Christmas cards. 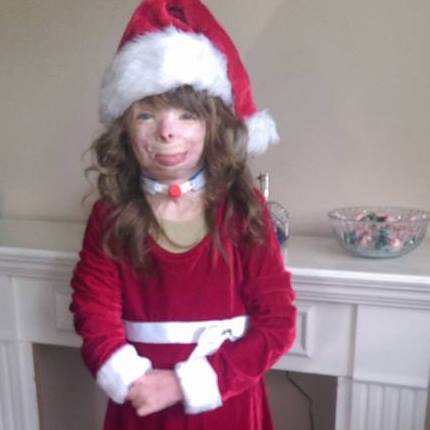 This little girl’s name is Safyre and her story has touched thousands of people.  Safyre and her family were the victims of a horrific fire caused by an arsonist 2 years ago which burned 75% of her body.  Just months after the fire Safyre lost her right hand and in March she lost her left foot.  Surgeons have performed numerous operations on Safyre in efforts to help her survive her horrific wounds. She lost her 2 younger siblings and her father in the fire and is now under the sole custody of her aunt, Liz Dodler.

According to a report by Buzzfeed, Dodler brought home a Christmas card tree for Safyre to put cards on from friends and family.  Safyre was very enthusiastic about the card tree and told her aunt, “I can’t wait to fill it up”, to which Dodler replied, “Hunny thats probably not going to happen. We maybe get 10 cards a year and the card tree holds 100.”

Dodler decided to encourage Safyre’s enthusiasm by posting a Facebook request for Christmas cards and what happened next was awesome!

If you would like to send Safyre a Christmas card, here is the address:


Previous Pearl Harbor Navy Veteran Has A Message For Obama That Is Going Viral!

Next Girl Sucker Punches Guy with Down Syndrome & Cerebral Palsy