This photo is causing quite a ruckus… 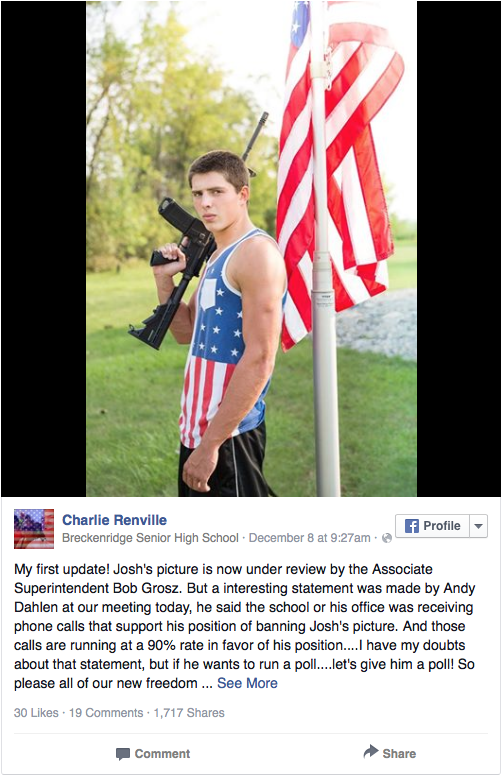 Foxnews has the story…

The father of a North Dakota high school student is outraged after his son was told he couldn’t submit a photo of himself holding a rifle for the school yearbook.

In the photo, Josh Renville, a senior at Fargo North High school, is pictured holding “his favorite rifle” and wearing a shirt emblazoned with the stars and stripes.

His father, Charlie, posted on Facebook Tuesday, expressing frustration that Principal Andy Dahlen had refused to allow the photo in the yearbook.


Renville explained that Dahlen said the photo isn’t appropriate because guns aren’t allowed on the school’s campus, and Josh must submit a new photo.

“What item is illegal in this picture?” Renville wrote. “I see a kid that loves his nation, loves free speech and loves the 2nd Amendment.”

He called for Dahlen to be fired, asserting that his family has been singled out over the years because of their “traditional conservative values and beliefs.”

In his Facebook post, Renville revealed that Josh’s picture is now under review by associate superintendent Bob Grosz.

Let us know what you think in the comments!

Next The Coconut Crab Is Like Something From Your Nightmares...Wait Until You See It In Action