Sacramento Kings point guard Rajon Rondo addressed Monday reports of his use of homophobic slurs during a December game.

Rondo allegedly called referee Bill Kennedy, who revealed he was gay Monday, a “mother——- f—-t” during a Dec. 3 game in Mexico City. Rondo was suspendedone game for directing derogatory language at an official and failing to leave the game in a timely manner. He commented on the matter via Twitter. 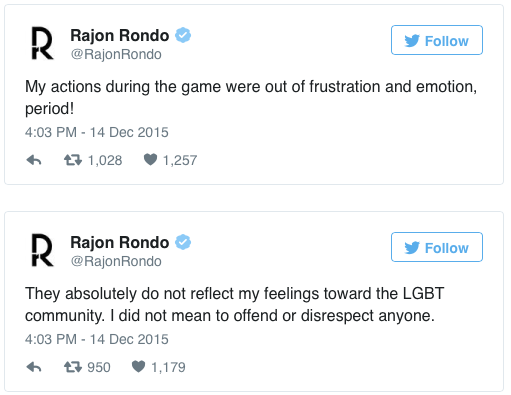 “I am proud to be an NBA referee and I am proud to be a gay man,” Kennedy told Yahoo Sports’ Adrian Wojnarowski. “I am following in the footsteps of others who have self-identified in the hopes that will send a message to young men and women in sports that you must allow no one to make you feel ashamed of who you are.”