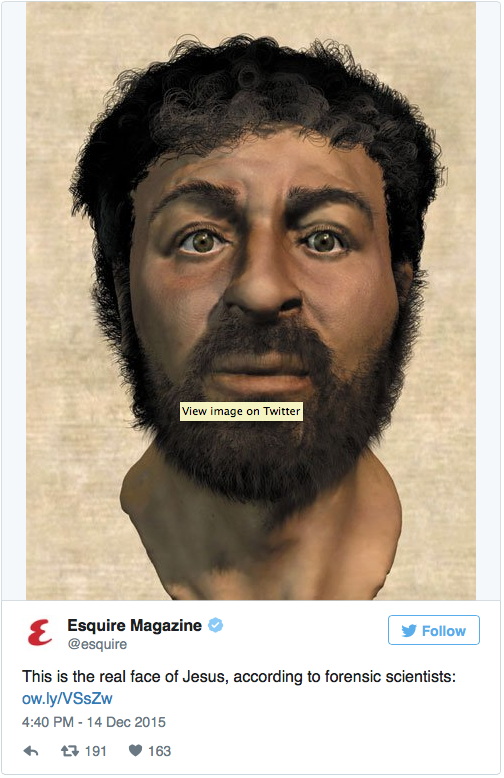 Neave has reconstructed what the face of Jesus probably looked like based on an analysis of Semitic skulls from the time.

His portrait depicts Jesus with dark eyes, a bushy black beard, short curly hair, and a tanned complexion. Neave says that his portrait of Jesus is not a portrait of Jesus specifically, but rather that of an adult Jewish man living at the same time and place as Jesus.

The features in the portrait are typical of Middle Eastern Jews in the Galilee area of northern Israel.


Neave and his team used computerized tomography to create “slices” of the skulls to help discover details of their structure. The team built a 3D digital reconstruction of the face and then created a cast of the skull. They added layers of clay to match the facial tissues estimated by the program, and then added in eyes, lips, and the nose to match the underlying muscles.

Neave’s team studied artwork from the first century to help determine Jesus’ eye color and how his hair looked. They also speculated that Jesus would have been more tanned and muscled than most depictions of him, as he worked outside as a carpenter until the age of 30. The team analysed skeletal remains of Semitic men in Galilee to discover the average build of a Jewish man in Galilee at the time. They concluded that Jesus was likely around 5 feet, 1 inch tall and weighed around 110 lbs.

Dr. Neave has reconstructed many famous faces including that of Alexander the Great’s father, King Philip II of Macedonia.