A woman in Florida was arrested for riding a cart in a Walmart while eating chicken and drinking wine, according to local media reports on Sunday…

The Epoch Times has more…

Josseleen Lopez, 25, is accused of riding on a motorized shopping cart through a store in Lecanto and opening bottles of wine and eating food out of packages, ABC Action News reported. 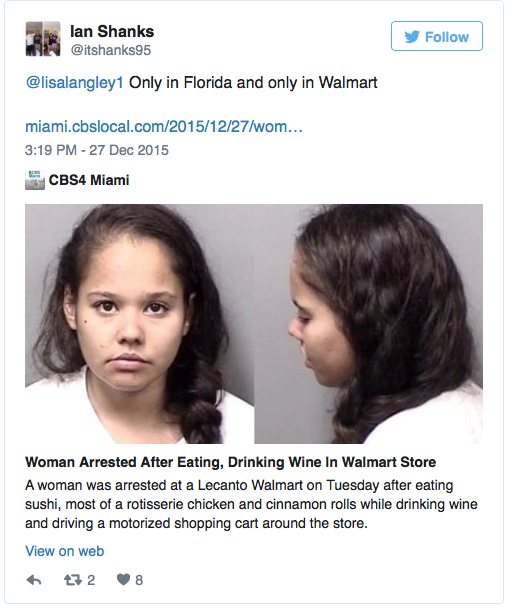 A loss prevention officer spotted Lopez riding a cart with a half-empty bottle of wine inside of it.


He later saw her eating an entire rotisserie chicken with sauce on the sales floor, according to the report

Store security said Lopez opened a sushi package and ate a piece before putting it back on the shelf. She also was seen eating a package of mini muffins and cinnamon rolls.

In all, she consumed around $32 worth of food, CBS Miami reported.

WFLA wrote that the employee “could see a half-empty bottle of wine in her cart. He also said he watched her grab a box of sushi from the shelf, eat a piece and put the box back. She did the same with cinnamon rolls and mini muffins. He saw her eat the majority of a rotisserie chicken while on the shopping floor.”

Lopez was also found to be in possession of syringes when she was arrested, deputies said. According to CBS, she admitted to using them to inject methamphetamine.

Lopez told deputies she was hungry and didn’t want to take the food outside. But she later acknowledged that she was breaking the law by doing so.

She was arrested on shoplifting and drug paraphernalia charges. She is now being held on $1,000 bond.


Previous 'Star Wars: The Force Awakens' Weekend By The Numbers