When a veteran or member of the armed forces dies, he or she is entitled to a ceremony that includes the presentation of a U.S. flag to a family member and a bugler blowing Taps. Most of the time, there is a three-volley rifle salute if requested by family members. But now, if the deceased served in the Air Force, the three-volley salute is not an option because the Air Force can no longer support riflemen for funeral services for veteran retirees. 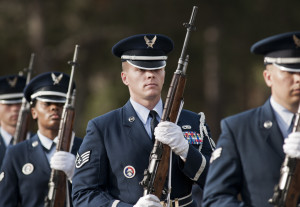 Seven member services for retirees included six members to serve as pall-bearers, a six member flag-folding detail, and a three riflemen to fire the salute. Veteran’s funerals now only receive the services of two-member teams, who provide a flag-folding ceremony, the playing of taps, and the presentation of the flag to the next of kin.

“To me, without the 21-gun salute, it just does not make it complete a proper military burial,” veteran Wayne Wakeman told Honolulu’s KHON 2 News. “I think because of sequestration or the lack of funds or whatever excuse they’re giving, that they had to hit the veterans.”

Wakeman is correct in supposing the cut is due to sequestration, the 2013 automatic federal spending cuts required by the Budget Control Act of 2011.

Next Woman Who Failed FDNY Physical Test 6 Times Gets Another Chance, And The Reason Why Will Make You Wonder....