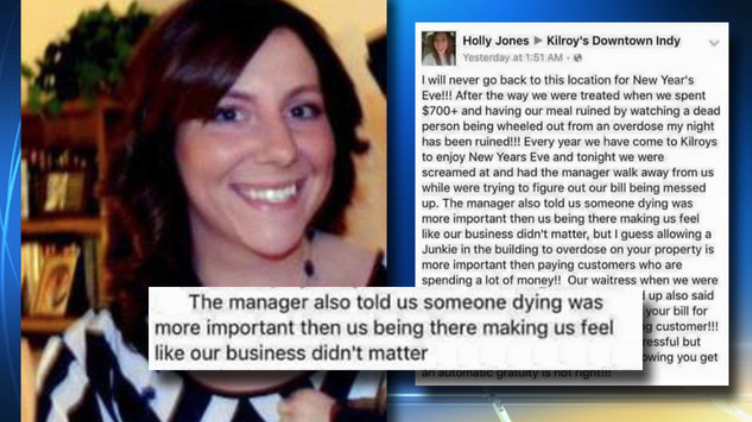 INDIANAPOLIS, Ind. – If you become ill while dining in Indianapolis, make sure you’re not eating with Holly Jones.

Jones, a hairdresser from Indianapolis, took to Facebook to complain that her New Year’s Eve was ruined when another restaurant diner had a heart attack during her celebration.

“I will never go back to this location for New Year’s Eve,” Jones began her post.

After seeing the frantic staff at Kilroy’s Bar N’ Grill focus on assisting the sick woman while ignoring her questions about a $700 bar bill, Jones ranted on the restaurant’s Facebook page that “The manager also told us someone dying was more important then us.”


Inquisitr says that in Jones’ scathing critique, she assumed the woman was a “junkie” and not a 57-year-old woman who had become ill during a night out with her husband.

The unidentified woman had suffered a heart attack and had to be revived by paramedics.

Chris Burton, the manager at Kilroy’s, didn’t take too kindly to Jones’ blasting and responded with a caustic reply of his own.

“I’m glad you won’t be coming back to Kilroy’s,” Burton wrote in his Facebook reply to Jones’ post. “Because we wouldn’t want anyone as cold hearted and nasty as you returning.”

Jones has since removed her own Facebook page and, according to reports, is now claiming that her account was hacked.

Because of the hacking claim, Jones is reportedly still demanding an apology from Kilroy’s, saying that they still should have had more “respect” for her.

Meanwhile, the woman who had the heart attack remains in the ICU at an Indianapolis hospital.

“It’s pretty silly,” Burton said, laughing. “But I’m just happy for the positive feedback, I was a little worried when I sent it.”

Not long after midnight on Jan. 1 a woman left a post on Kilroy’s Facebook page complaining that she will never go back “after the way we were treated when we spent $700+ and having our meal ruined by watching a dead person being wheeled out from an overdose.”

“But,” the customer posted, “I guess allowing a Junkie in the building to overdose on your property is more important that paying customers who are spending a lot of money!!”

Burton, who was not at the restaurant at the time but heard of the events afterward, replied to the customer’s post on Facebook: “The ‘overdosing junkie’ that you speak of was a … woman who had a heart attack. Thankfully she was finally revived at the hospital and survived. It sounds like you were very concerned about her so I thought you should know.”

He continued: “But I can completely understand why you think being intoxicated” jerks who “didn’t understand your bill should take priority over a human life.”

“I especially appreciate you making your server (who doesn’t curse) cry as well. I’m sure she really enjoyed working on New Year’s Eve just to deal with people such as yourself.”

Burton captured screenshots of the Facebook thread before the customer removed them. He posted the screenshots on his personal Facebook page, then an employee at the Broad Ripple Kilroy’s location posted them to her personal Facebook page. The post exploded from there, receiving thousands of shares. It was picked up by a New York City blog, the Daily Mail in the United Kingdom and other media outlets.

“I’m getting messages from servers and bartenders calling me a hero, a crusader for the service industry,” Burton said.

The customer has since removed her profile page from Facebook. The Indianapolis Star is attempting to reach the woman for comment.

Burton does feel “slightly bad” for the customer now. “If I had any idea it was going to go viral, I wouldn’t have used her name. When something like that goes viral, people on the Internet get a little mob mentality and start sending death threats, calling her employer trying to get her fired. That is completely unnecessary. But you know, you’ve got to be careful what you post online. It can come back and bite you.”

Kilroy’s is now asking for something else to go viral — a GoFundMe for the victim’s medical bills, which already has raised more than $3,000 dollars. The 57-year-old woman who suffered cardiac arrest that night is in critical care. Burton has kept in touch with the victim’s family, who reached out to him to thank him for his efforts.

“It looks like she is going to be OK,” Burton said.

The employees were really shaken up, he said. They thought someone had died in the bar.

His message now: “Just be nice. … People in the service industry are people. We all are humans that need to get along with each other. And everything will get handled a lot better if you are polite and nice.”

This story originally appeared on The Indianapolis Star’s website.


Previous Old Age Trumps Youth On The Beach, WITH ONE PUNCH!

Next Fearless Iraqi Fighter Taunts Sniper Like A Bullfighter