One woman’s quick thinking may have saved the life of her children and herself.

According to Fox News:

A Florida woman who claimed her boyfriend was holding her and her children hostage sent a secret message asking for help in an online pizza order. 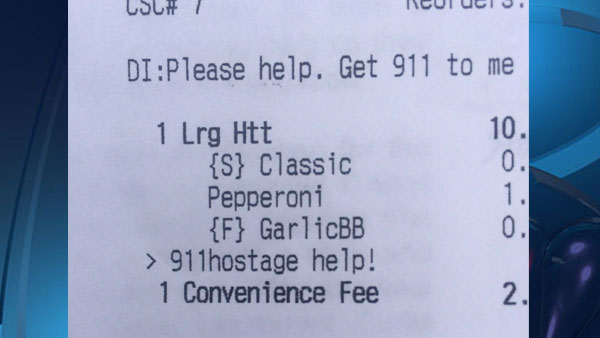 Highlands County investigators told WFLA-TV a Pizza Hut in Avon Park received an online order for pizza Monday afternoon from Cheryl Treadway. Treadway asked for employees to call 911 in the comments section of the order form. The employees alerted police.

When deputies arrived at the home, Treadway opened the door and told police that her boyfriend, Ethan Nickerson, had a knife. Deputies escorted Treadway and a child to safety and Highlands County Sheriff’s Lt. Curtis Ludden said Nickerson was arrested.

Two other children in the home were not harmed. Police say Nickerson was holding Treadway all day until she convinced him to let her order pizza on her cellphone.

Nickerson was charged with aggravated assault with a weapon without intent to kill, battery, false imprisonment and obstructing justice by depriving communication to law enforcement.

This story could’ve taken an entirely different direction had the employee not paid any attention to the message on the receipt.

Next [WATCH] Aaron Rodgers Looks AWKWARD In This Oscars Video, Then Scores With A Photobomb