Does a business have a right to say something like this or are they taking it too far?

A controversial sign posted to the front door of a north Charlotte Japanese restaurant is raising eyebrows.

The sign has been up for the last three years, but the owner just recently made the sign bigger and more prominent so people are taking notice.

The sign on the door of Kabuto Japanese Steakhouse and Sushi Bar off WT Harris Boulevard reads, “Take your hood down. Pull your pants up. Finish your phone conversation. Marijuana smell not allowed. We will be glad to assist you.”

The photo has been circulating on social media, with some people taking offense while others saying they have no problem with the message. 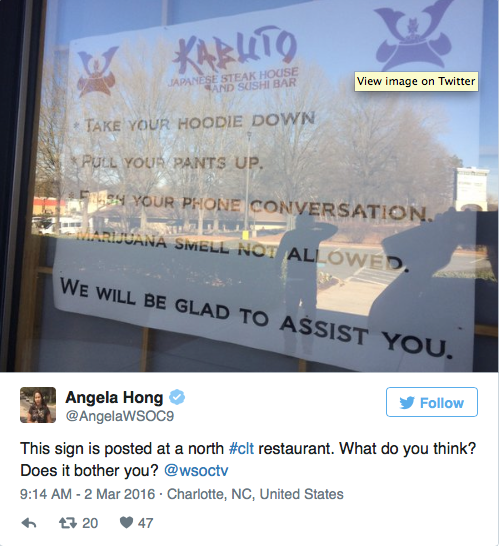 WSOC spoke with the restaurant owner who said the feedback from the sign has been nothing but positive. He told WSOC the sign has nothing to do with race.

There are four Kabutos in the Charlotte area, each owned and operated independently.

Next time I am in Charlotte, I plan to eat there, and my pants will be worn properly!

Next Terrorists Get Away With Murder But If You Put Bacon In A Mosque, Jail For Life?