A Florida deputy has been praised for saving a woman’s life after driving in front of her car as it was about to be hit by a man going the wrong way up a highway. Hillsborough County Sheriff’s Deputy John Robert Kotfila Jr., 30, was remembered by his fellow officers today after helping to save the life of Sarah Geren, 42, on Saturday.

Geren said she was about to be hit by a man driving the wrong way up the Lee Roy Selmon Expressway, in Tampa, when Kotfila accelerated past her, crashing into the oncoming car head-on.

Both Kotfila, a six-year veteran of the Hillsborough department and the third generation in his family to serve in the police, and driver Erik Thomas McBeth, 31, died in the collision.

Geren told The Tampa Tribune: “I never got an opportunity to meet the deputy, but I think he is the most amazing man. He died a hero. I was a random person on a random road at a random time. He saved me.”

According to WFLA-TV, Geren said she saw the car accelerating toward her at around 2.45am and began flashing her lights to warn the driver, but could not react fast enough.

She added: “I started to pull over to the side of the road, but that hadn’t even occurred all the way when the officer rushed around me. One or two seconds after he passed me, he hit the car, instead of me. This man put himself in front of us as a human shield.” 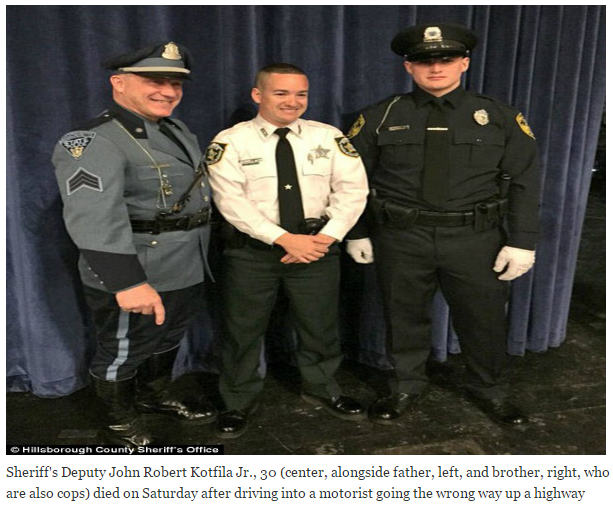 She said she wasn’t even aware that Kotfila was driving behind her until he accelerated past, smashing into McBeth’s car.

The force of the impact spewed debris across the highway, and images of Kotfila’s patrol car show the front end and engine block have crumpled backward into the driver’s seat. Geren said she was able to stop her car against the central crash barrier and ran to check on both Kotfila and McBeth, but could find no sign of life in either vehicle.

McBeth was pronounced dead at the scene while Kotfila was transported to a nearby hospital, where he later died from his injuries. Kotfila had been traveling along the road after visiting a nearby hospital as part of a case he was working on, police said.


Previous BREAKING - Video Shows Lightning Striking Trump Tower In Chicago As He Won Illinois. A Sign From Above?

Next [VIDEO] Just As Trump Was Declared The Winner Of Illinois Primary Something INCREDIBLE Happened Above!