A married South Carolina police officer and decorated army war veteran was shot and killed on Friday, March 11th, by a suspect who later killed himself, police said.

Police said Greenville Officer Allen Lee Jacobs was with several officers who were trying to conduct a field interview with Deontea Perry Mackey, identified as a self-admitted gang member, at 12.20pm.

Officers patrolling the Nicholtown Community had seen Mackey and wanted to speak with him about a weapon, according to Greenville Online.

Miller told a news conference that shortly after the officers approached Mackey, he ran from them towards the Swamp Rabbit Trail and a foot chase ensued.

Jacobs was reportedly wearing a bullet-proof vest and his weapon was still holstered.

Police said at this time it is believed none of the officers returned fire.

Miller said Jacobs, a four-and-a-half-year veteran of the police department, was transported to Greenville Memorial Hospital with life-threatening injuries where he was pronounced dead.

“Our officers who were here on the scene and to assist performed CPR on our officer and the CPR was unsuccessful,” Miller said.

“We lose, we hurt, we ache,” Greenville Police Chief Ken Miller told Greenville Online. “No one wants to lose their officers.” 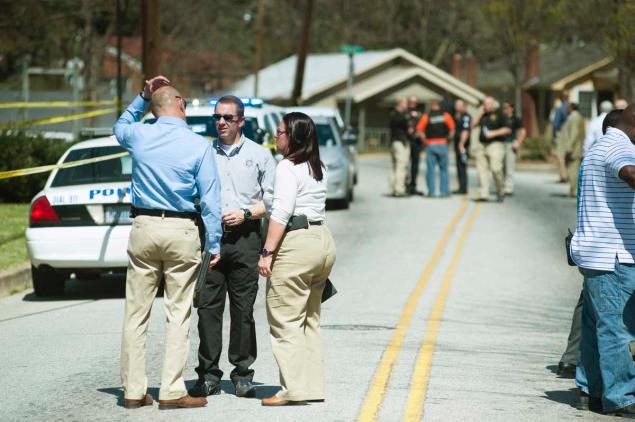 According to Miller, Mackey called his mother before he fatally shot himself near the Swamp Rabbit Trail as officers closed in on him. The chief said two officers witnessed that shooting.

Miller refused to identify the gang Mackey was a member of and only stated the gang is ‘known and established’ in the community, according to Greenville Online.

Jacobs was married and the father of two young boys, according to police.

His wife is pregnant with the couple’s third child, a baby girl, due to be born in July.

Before he joined the police department in August 2011, he served in the United States Army and was a decorated Iraq war veteran. He received several medals and commendations for his service.

Last August, he was promoted to the rank of Police Officer III and in addition to serving on the Community Response Team he also served as a member of the S.W.A.T. team.

“When you lose an officer the community loses an officer,” Miller said. “I have come to know this officer and his work ethic and have found him to be an extraordinary person and officer and contributed to the police mission. He was as dedicated as anyone could be dedicated.”

Jacobs, the first cop killed in the line of duty in Greenville since 1996, was also struck by a car during a 2014 incident.

Darell Johnson ran into Jacobs, breaking the officer’s leg, after the cops told him to turn down the music in his car, according to Greenville Online.

A GoFundMe page created for officer Jacobs’ family had raised more than $9,000 in just hours after news spread of his tragic death.

Next [VIDEO] Little Girl Asks Ship To Blow Horn, Gets More Than She Bargained For!