From 2009 to 2013, the U.S. issued 680,000 green cards to migrants from Muslim countries — more than the entire population of Washington, D.C. — and is on track to do the same in the next five years, if policy is not changed. The breakdown by country over those five years is illustrated in the chart below produced by the Senate Subcommittee on Immigration and the National Interest, based on DHS data. 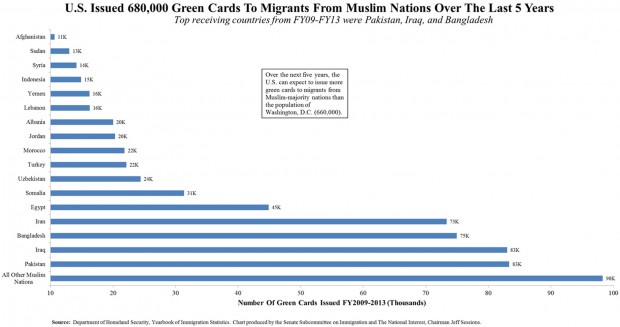 (Senate Subcommittee on Immigration and the National Interest)

By region, the U.S. issued nearly half a million green cards to Asia and Africa in 2013, compared to just 86,556 from Europe and 80,945 from South America. Every year under current policy the U.S. issues an average of one million green cards, which guarantee immigrants a lifetime work authorization, access to federal welfare, Social Security and Medicare, the ability to obtain citizenship and voting privileges and the immigration of their close relatives.


Previous PIERS MORGAN: When It Comes To Terror, Isn’t It Time We Started Listening Seriously To Trump?

Next [WATCH] Store Owner PATIENTLY Turns The Tables On Robbers With An Unusual, BADASS Weapon