A pastor accused Whole Foods of writing an anti-gay slur on his cake, but now the video evidence has appeared…

The Whole Foods grocery chain is suing a customer who claimed the bakery staff at a Whole Foods outlet decorated his cake with a gay slur. 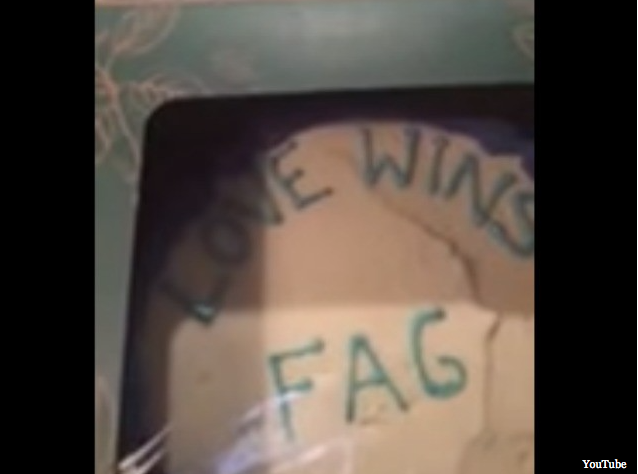 “After a deeper investigation of Mr. [Jordan] Brown’s claim, we believe his accusations are fraudulent and we intend to take legal action against both Mr. Brown and his attorney,” the company said in the statement published by the Austin Statesman newspaper.

Jordan Brown, the pastor of the Church of Open Doors and an open homosexual, claimed April 18 that a bakery worker at an Austin, Texas outlet wrote the word “fag” on a cake he asked to be decorated with the words “love wins.”

Brown says he didn’t tell the bakery workers he was gay and didn’t actually look at the cake until long after he left the store. The gay pastor filed a lawsuit in Travis County District court and is asking for a jury trial.


But Whole Foods is firing back, standing behind its employees and saying Brown has made a fraudulent claim.

The grocery chain released surveillance video of the checkout area showing Brown purchasing the cake and says the video invalidates the pastor’s claims.

At issue is the location of the UPC code used to ring up the price at the checkout counter.

On Monday, through his attorney, Brown showed photos of the cake box when he purchased it. The UPC sticker is clearly on the side of the box.

However, Whole Foods maintains the video of the checkout process clearly shows the cashier scanning the top of the box, not the side, to ring up the purchase.

“After reviewing their security footage of Mr. Brown, it’s clear that the UPC label was in fact on top of the cake box, not on the side of the package,” Whole Foods said in its company statement. “This is evident as the cashier scans the UPC code on top of the box,” the company said.

“We stand behind our bakery team member, who is part of the LGBTQ community, and we appreciate the team members and shoppers who recognize that this claim is completely false and directly contradicts Whole Foods Market’s inclusive culture, which celebrates diversity,” the statement concluded.


Previous [WATCH] Is It Wrong To Punch A Transgender 'Woman' Who Spits In Your Face?

Next [WATCH] Did This Armed Citizen Have The Right To Pull His Gun On Prankster?