A wounded veteran laying in a hospital bed ordered a pizza, but what he got was so much more. Retired veteran Justin Lane, who lost both legs during a tour of Afghanistan, shared a story about a random act of kindness on Facebook and it quickly went viral. 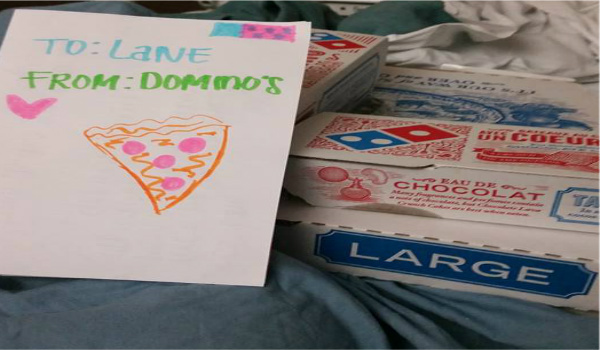 Those who work with wounded soldiers every day say this gesture is just a small facet of the countless random acts of kindness by the San Antonio community. Justin Lane’s life changed forever back in 2011 when a 200-pound IED ripped through his truck.

“When it penetrated my truck, it actually took off both my legs,” said Lane, also known as J.P. “It snapped my pelvis in half and my spine dislocated from my pelvis. It snapped my right arm in half, my middle finger was cut off, my four front teeth were knocked out and everything inside my torso was destroyed by shrapnel instead of my heart and my left lung.” 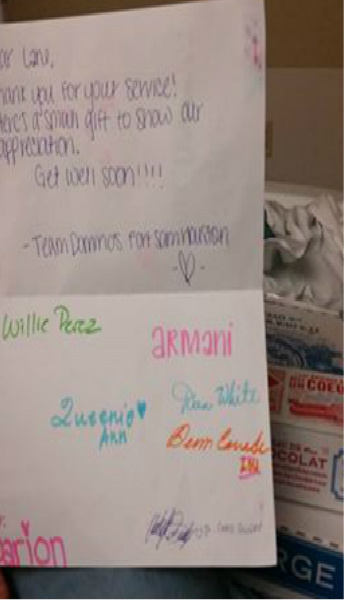 On Monday, he checked into BAMC for treatment for nerve pain in his legs. At dinner time, he called the Domino’s Pizza at Fort Sam Houston.

The pizza crew threw in a bit extra that went a long way for the veteran. They added some dessert and a get well card signed by every member of the Domino’s team at Fort Sam Houston.

“‘Dear Lane, thank you for your service. Here is a small gift to show our appreciation. Get well soon!!!! Team Dominos, Fort Sam Houston.”


Previous [VIDEO] It's No Conspiracy, Chelsea Clinton Confirms Gun-Grabbing Agenda If Her Mother Is Elected