Phone records do not lie…

Hillary is having the mother of all bad weeks. With Bernie Sanders assailing her at every turn on the campaign trail, she is flailing and now this. Judicial Watch has gotten a hold of a transcript of a phone call between the Hillary and then-Egyptian Prime Minister Hisham Kandil. It was released by the State Department and pretty much proves she knew the attack in Libya was terrorism and not caused by a lame, pre-picked video. This is evidence that she willfully lied and conspired to cover up her lies. In my viewpoint, it also implicates Barack Obama. She was fully cognizant that the Benghazi attack was a pre-planned terrorist attack, which makes her an accomplice to murder. Per the transcript and Hillary: “We know the attack in Libya had nothing to do with the film,” Clinton told Kandil. “It was a planned attack – not a protest.” They also knew it was a group affiliated with al Qaeda. Word on the street is an indictment is on the horizon, but Obama will also pardon her.

“We know the attack in Libya had nothing to do with the film,” Clinton told Kandil. “It was a planned attack – not a protest.”

“You’re not kidding. Based on the information we saw today we believe that group that claimed responsibility for this is affiliated with al-Qaida.” 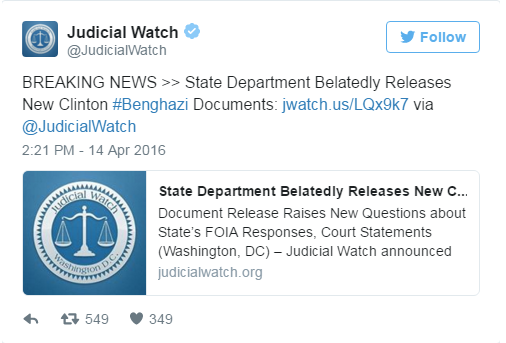 There are so many questions connected to this… will it bump Clinton out of the presidential race? Will the FBI do anything with all of this? Will an indictment actually come down over it? I guess we’ll just have to see how this plays out. I’m not getting my hopes up over it. But I would like to know just how much evidence is needed to take down a murdering dirt bag like Hillary Clinton. How many scandals have to float by… how many people have to die before there is even a shred of justice applied? This is making an absolute mockery of our government, our judicial system and America in general. Is corruption now the new norm in American government? It looks like these people can get away with literal murder and not have to face any consequences for it. I’m beginning to relate to the reasoning in France when the guillotine was in fashion. It brings to mind tar and feathering. Our Founding Fathers would not have stood for this. Have you had enough yet America? Because I know I have.

Next [WATCH] Armed Robbers Enter Store But The Clerk Had MORE Than Just Cash In The Drawer 'BOOM!'