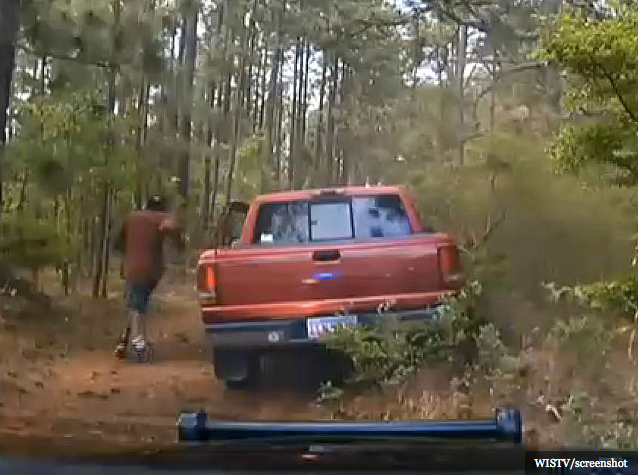 An NRA member with a concealed carry permit pulled his weapon on a fleeing suspect, cornered him, and held him at gunpoint for police.

According to WYFF, Lexington County Sheriff’s Captain Adam Myrick said the incident unfolded after Gaston Police attempted to stop a pickup truck over seat belt violations. The driver of the pickup led police on a high-speed chase “for 10 miles,” until police were able to deploy spike strips and pop his tires.

Once stopped, the driver jumped from the vehicle and took off on foot. When he ran across property owned by the NRA member, the owner pulled his gun and gave chase — corning suspect Joseph Drafts and holding him at gunpoint.


The NRA member — who wishes to remain anonymous — said, “I told him to get down. I told him repeatedly to get down and lay face down. My co-worker that had just pulled up, I turned around and yelled at him to go get the cops at the other end of the property.”

Drafts “was arrested and charged with driving under suspension fourth offense, failure to stop for blue lights and breach of trust.”


Previous [WATCH] Airport Worker Gets Fired But Still Has Keys To The Large Equipment, An Airplane Suffers!

Next [WATCH] There Is A 600ft Rope Swing Over A Ship Wreck, Got Guts?