There is always hope, even in situations as dark as this… 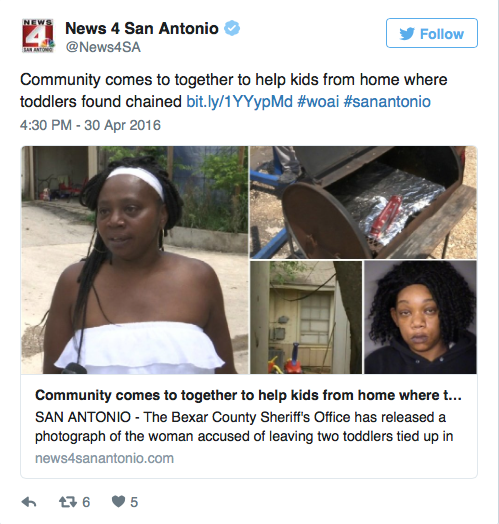 Neighbors who overheard the cries of children found chained and tied up in a back yard described the cries of the young victims as “howling” and claim the children have been mistreated for quite some time.

The two young children were found in the back yard, one chained to the ground and the other tied to the back door with a leash Thursday night on the 1800 block of Chipping Drive in San Antonio, Texas.

A neighbor reportedly made a late night call to police and when deputies arrived to the home, six other children were found inside unsupervised.

Neighbors claim the abuse has been ongoing.

“These kids getting beat the [expletive] out of. That’s what I have been seeing,” said Michelle Williams, a neighbor.

Porucha Phillips, 34, has been charged with first and third degree injury to a child in relation to the incident.

However, she had custody over them, according to the BCSO.

“This could have been a lot worse,” added Keith.

At least two people called 911 Thursday night, including the son of Barbara Clanton who was just getting back from the store with his friend when he heard “howling.”

“He said I looked over this fence and I could see a little kid hurt,” said Clanton.

She also said that Phillips was well known in the area.

“I knew she had six children I was never ever aware she had custody of two others,” added Clanton.

What happened has left many appalled, including Sen. for District 19, Carlos I. Uresti, who has been pushing legislation to stop child abuse and neglect.

“We are looking at what do, we need to do, to help our case workers do their job better,” said Uresti.

The senator also said that the issues goes beyond legislation.

“We have to come together. We have to raise the awareness.”

It is an endless effort to find a solution.

“If you feel that stressed. There are hotlines that are very easy to talk to,” added Clanton.

We have learned from a source close to the investigation that Phillips claims the two kids were quote “dumped” at her house and she was going to take them to the fire station the next day.

According to the Bexar County Sheriff’s Office, the father of the six kids inside the home is not facing charges right now.

Next What Happens If You Drink 4 Energy Drinks A Day For 7 Years?