Would you support a Bill such as this one in your local area?

Transgender people could face fines of up to $500 for using restrooms according to their gender identity under an ordinance to be considered by the City Council in Rockwall, Texas, on Monday.

“I just think that it’s insanity not to have those protections in place,” Pruitt, a Republican, told WFAA-TV. “These folks aren’t transgender that this is targeting. This is targeting folks of the opposite sex that are going into those restrooms under the guise of being transgender and having access. … This is not about sexual orientation or anything of that nature. It is about privacy and the protection of our children.”

A Rockwall Police Department spokesman told WFAA-TV he couldn’t recall any instance of a cisgender man pretending to be transgender to gain access to a women’s restroom in the city. According to Buzzfeed’s Dominic Holden, “there are no known instances in 17 states and 225 cities with laws banning LGBT discrimination of the policies being used to promote or defend predatory behavior in bathrooms or locker rooms.”

Rockwall would be the first city in Texas to enact such a law. Last week, the city of Oxford, Alabama passed an anti-trans bathroom ordinance under which violators could face up to six months in jail. The local ordinances come in the wake of North Carolina’s House Bill 2, as well as retailer Target’s announcement that it will allow trans people to use the restrooms of their choice in its stores. 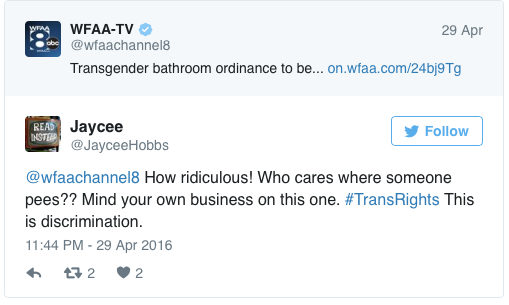 Pruitt, who posted the text of the proposed ordinance on his Facebook page, told WFAA-TV he doesn’t expect any business backlash over the ordinance. According to Wikipedia, Target is the 10th-largest employer in Rockwall, with 200 workers. Other large employers in the city include Costco and Hilton.

Lou Weaver, who is transgender and serves as programs coordinator for Equality Texas, told WFAA it’s always been illegal for people to enter a restroom to commit a crime. Weaver is male but his birth certificate indicates he’s female. 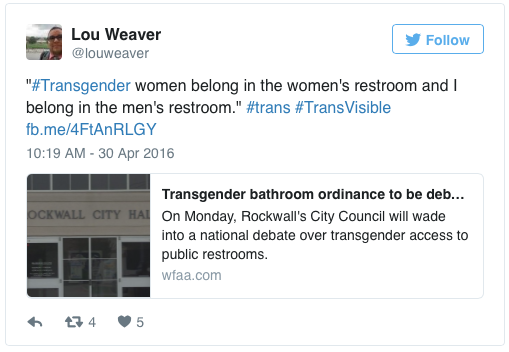 Ironically, for some trans people, the Rockwall ordinance would actually guarantee their right to use the appropriate restroom. In Dallas County, which is adjacent to Rockwall, judges routinely grant gender-marker changes to trans people, allowing them to correct their birth certificates.

Read the proposed Rockwall ordinance, as well as an email to Pruitt from Nell Gaither, president of Trans Pride Initiative.


Previous [PHOTOS] The Walmartians Are Back! Who Needs Target?

Next Idiot ISIS Fighters Can’t Figure Out Rockets, Then 1 Flies Through Them