A Savannah officer went above and beyond for no other reason than to simply comfort a small child that needed help… This guy proves that not all news is bad and that not all cops are bad. 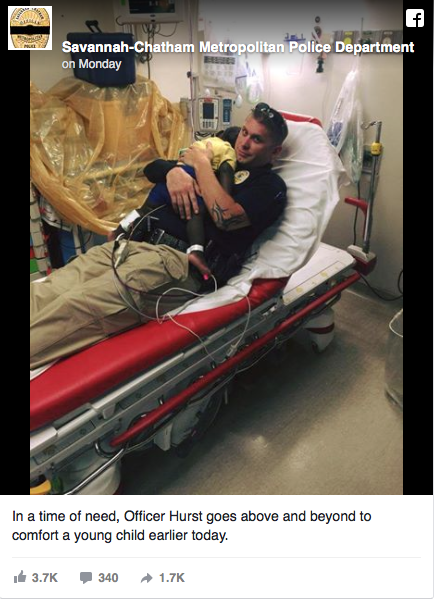 This picture, showing officer James Hurst, laying in a hospital bed with a small child has gone viral all over the world, and now we have the story behind the picture.

He didn’t run into a burning building, he didn’t stop a speeding bullet, he didn’t walk on water, what Officer Hurst did do was make a difference in a child’s life with a simple action he was never asked to do.

The photo of Hurst has now been seen by thousands around the world. It is him and a little boy that police found wondering in the Cuyler-Brownsville neighborhood— alone.

“It was upsetting, I mean I have two small children of my own,” Hurst said.

We were not told much about the circumstances around why the child was wandering around on his own, but what is important is what happened next. Hurst took the young boy the hospital to be checked out.

“The boy being so small, became very upset, was crying, was sobbing,” Hurst said.

That is when Hurst made a choice: leave after all his job was over, or stay.

He stayed and asked the medical staff if he could simply hold the child.

“I was standing, and he was asleep on my chest, but with all my gear and armor, it got very heavy,” Hurst said. “I had to sit down on the bed to make it easier on myself and the child.”

That is when the picture was taken. Hurst, who has only been on the streets of Savannah since January, said he never wanted any recognition; he was just doing what he has been taught here.

“It is what we do every day, not just me, but the 600 officers in this department,” Hurst said.

Whether it is running down criminals, having to take or give a life, or simply offering a shoulder to sleep on.

“He was quite comfortable, he was passed out,” Hurst said.

Savannah-Chatham Metro Police have officially closed this case, and will not be filing any charges. It is now in the hands of the Department of Family and Children Services.

Next While We Were Distracted With Obama's Transgender Rules For Schools, He Did THIS With Obamacare!