Poor Liberals. It was SO CLOSE…

Things got tense real quick on the floor of the U.S. House of Representatives after a bill was defeated and Democrats started whining.

Democrats claim the provision allows any federal contractor to discriminate against gay, lesbian, or transgender people – despite laws already on the books providing discrimination protections.


With only minutes to go in voting, the tally appeared to be 217 yeas against only 206 nays, but last minute changes by some Republicans lead to the bills defeat by a margin of 213-212, and that got the Democrats whining in glorious fashion.

But it wouldn’t be a good Democrat rant without comparing Republicans to Nazis or Russians (this time, it was Russians):

The real #Shame is that Speier, a representatives for one of California’s uber-liberal districts, doesn’t remember Democrat Harry Reid leading the push to eliminate most filibusters from the Senate just to force through ultra-partisan judicial nominees. You can’t complain about “dirty political tricks” when your party uses every one in the book (and some that aren’t in the book). 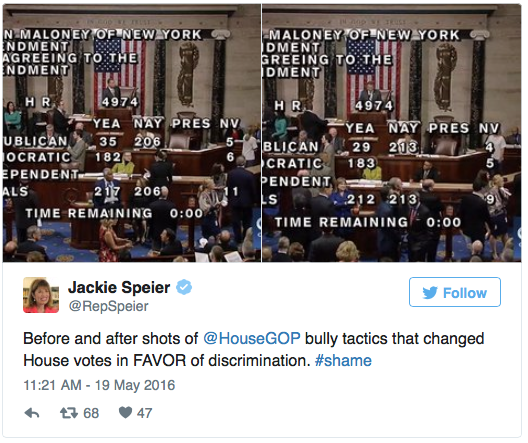