Will Hillary be indicted prior to the election? Some think so:

A blog entry from Huffington Post suggests that Democratic party insiders are whispering to each other behind closed doors, and Hillary Clinton may be on her way out.

Clinton is rumored to be on the verge of facing indictment for espionage. Bernie Sanders fans are rejoicing, as it looks like the Vermont Senator’s path to nomination is looking very clear again.

“Hillary is most likely guilty of [at a minimum] unintentional espionage and probably much worse and it looks like an indictment at this point is imminent.”

Word is that the Democrats are smart enough to “hedge their bets,” removing the beleaguered Hillary and installing Bernie Sanders in time for a showdown with presumed Republican candidate Donald Trump.


Many outlets have been reporting that Sanders is the stronger candidate against Trump, and the Democrats could nominate Bernie for the sake of the party to avoid a dreaded Trump presidency. Many argue that Hillary Clinton is vulnerable to indictment should new evidence about her past transgressions surface, and a person with such a dark cloud hanging over her cannot be made the presidential nominee.

It would obviously be a disaster if serious accusations were leveled against Hillary in the middle of a presidential battle between Clinton and Trump.

“It’s only a matter of time before the majority of the DNC begins to realize that Hillary is a liability to the party and once this tipping point occurs, establishment democrats will defect en masse like rats from a sinking ship.”

The Wall Street Journal reported last month that “the FBI primary” could be difficult for Clinton to win, even if she continues to perform strongly in caucuses.

“If the bureau recommends that the Justice Department indict Mrs. Clinton [or her aides] in sending classified information over a private email server, the campaign could be completely scrambled.” 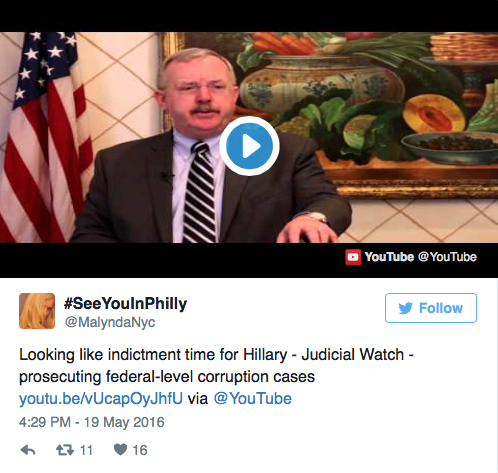 WSJ also reflected on what would happen if charges were leveled against Clinton after she became the nominee. Apparently “the Democratic leadership could move to replace her on the ticket.” However, Hillary would have to agree to resign. She would then be replaced “either by a snap convention or by the Democratic National Committee acting on the party’s behalf.”

Clinton and her husband have pressed through many scandals before, so many suspect that the former First Lady will press on for as long as she can, even as thunder clouds continue to gather and loom.

“Mrs. Clinton wouldn’t give up easily—she and her husband have brazenly pressed through previous scandals.” 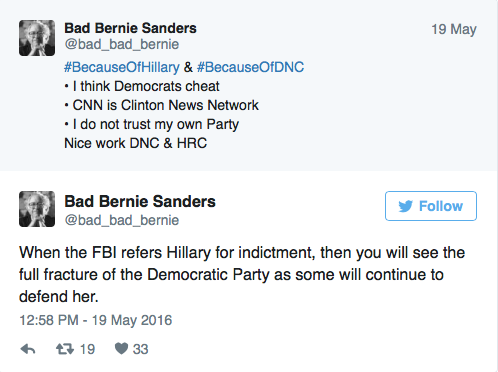 If a Hillary Clinton versus Donald Trump race eventually manifests, it will be a race between two of the most disliked presidential candidates in American history, according to polls.

Huff Post argues that Bernie Sanders will triumph in the end because people “have become immune to the pandering and lies of politicians.” Bernie’s incredible insurgent campaign, and the momentum he has gathered since he began his presidential bid backed by a small Vermont grassroots movement is said to be the latest manifestation of a populist energy that first exploded in the 1960s, beginning with that decade’s anti-corporate movements and civil rights activism.

“This is the simple reason why Bernie is going to win. There is a mass awakening happening on the planet right now and enough people have become immune to the pandering and lies of politicians that we are no longer susceptible to their manipulations and deceit. This started off with the movements of the 60s, morphed into the Occupy Movement and has spilled over into Bernie’s Campaign. Enough is enough.”

Next BREAKING: The NRA Is Endorsing Trump