Do you find this sign offensive or inappropriate? Perhaps the Strip Club is just being honest…

A Michigan strip club’s billboard advertisement has caused a controversy and has disgusted Clare County residents.

The large sign for Miceli’s Corner, which can be seen by passersby, encourages female graduates from the class of 2016 to come in and apply for a job in the sexual entertainment business. 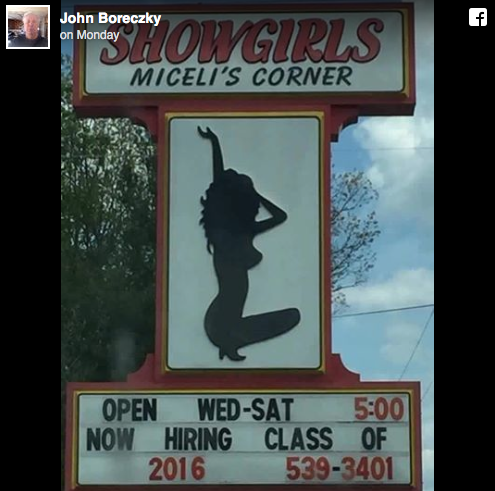 “If you’re a graduate, you [should] want to go to college,” Lisa Mulholland, a Harrison resident said according to TV5.

The billboard is gaining traction and responses on social media. The sign also features the club’s hours and a telephone number.

Facebook user Jason Swejkowski posted a picture of the strip club’s advertisement, with the caption, “Miceli’s corner made the news.”

“For being best strip club in Michigan?” asked Aaron Ploss.

“No for their sign it says now hiring class of 2016, they could use some fresh talent, LOL,” Jason Swejkowski responded.

At the time of this article’s publishing, TV5 was unable to obtain comment from the owner of Miceli’s Corner.

Next [WATCH] Teens Hire Graduation Speaker To Discuss Equal Rights But She Starts To Strip-Tease And Lap Dance?