Now their story has gone viral!

The man accused of an attempted date rape that made national headlines has been identified.

Michael Hsu was arrested last Thursday after a group of three friends said they noticed him spike the drink of his date at a Santa Monica, California restaurant.

The 24-year-old was taken into custody at the restaurant and booked on charges of drugging with intent to commit a felony.


As of Tuesday morning, he was still being held at the Santa Monica Police Department Jail on $1million bail. He is also due in court later Tuesday for a hearing.

The three women who claim to have busted Hsu on Thursday recounted their tale on Facebook the day after the incident, creating a meme that has been shared more than 110,000 times.

The picture shows the three women in a Charlie’s Angels stance with the line ‘Don’t roofie someone on our watch’. 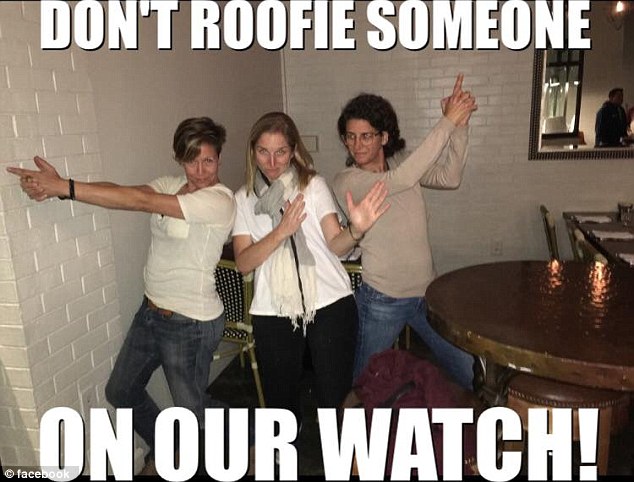 Sonia Ulrich, Marla Saltzer and Monica Kenyon were out for dinner at FIG restaurant when they say they noticed the man pour something into his companion’s drink as they shared a bottle of wine.

In their Facebook post titled ‘GUESS WHO STOPPED A RAPE LAST NIGHT?! THESE GALS!’, Sonia details what happens.

Jezebel reported a manager at the restaurant corroborated the women’s story.

Sonia wrote on Facebook: ‘Monica, Marla and I were at Fig at the Fairmont for their delicious happy hour.

‘I was going on about something and saw Monica staring behind and making a funny face. I stopped. “What’s going on?” After a few second she said, “That guy just put something in her drink”.’

Hsu allegedly slipped something in the woman’s drink while she was in the bathroom so Sonia raced to the lady’s room to tip off the unsuspecting victim.

Sonia waited by the bathroom sink for the woman to exit the stall and when she did she confronted her.

‘Hey! Um, this is kind of weird, but, uh, we saw the guy you were with put something in your drink,’ Sonia said she told the woman.

She responded: ‘Oh My God.’

‘Marla noticed him several times chinking his glass to hers to get her to drink. She played it cool. Mostly, I believed, just stunned.

‘The staff wanted to jump in and dump the glass, dump him, do something!

‘I was going through fantasies of walking up and demanding he drink the tainted glass of wine.’

The manager then came by the man and woman’s table and said one of the ‘computers was down’ and there would be a slight delay in bringing them the bill.

Next, Sonia claims Santa Monica Police Department officers walked in and told Hsu to go with them.

Allegedly, Hsu followed them without hesitation.

‘The head of security came by and said that because we notified them immediately, they were able to go back and review the footage from the security camera.

‘They got him on tape. They had proof of him drugging this girl. They took the glass away as evidence.

‘They kept us for statements. We asked the girl if she had a ride home,’ Sonia wrote.

The woman tells Sonia, Marla and Monica that Hsu drove and her car is at his house.

Sonia then writes that multiple people approached their table to tell them they knew someone who had been drugged and thanked them for speaking up.

‘Some heroes don’t wear capes. Thank you,’ one said.

Next [WATCH] What? Libertarian Party Candidate Strips To A Thong On C-SPAN