How does it make you feel to watch these transgenders burn the flag?

A video has emerged of marchers burning the American flag whilst on a “trans power” march in San Francisco.

It shows people whooping and celebrating as the flag is burnt, and was filmed by a trans activist under the name of “mx emily a rose,” although she claims she was not responsible for the action itself.

After uploading the video, she ran a poll in which she asked her followers for their opinion on the video she took, where 80% of people said they were offended by the action. 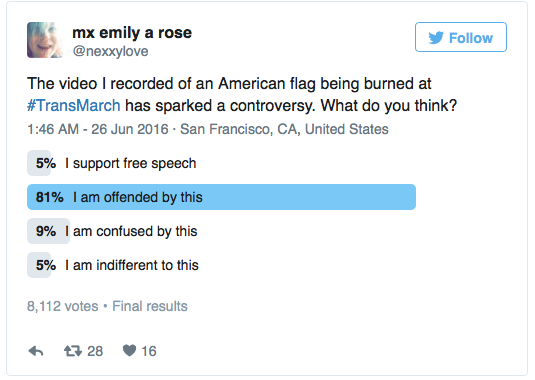 She also said that within 15 minutes of Breitbart Tech Milo Yiannopoulos editor posting the footage, someone had posted her address online.

However the justification for the act is currently still unknown.

Desecration of the American flag is generally interpreted as an act of political war against a nation, although the US constitution also bans the prohibition of banning the flag, on the grounds of the first amendment.