A couple was caught on camera having sex at the top of a Russian monastery tower, only to be interrupted by another person (video below).

The drone operator caught the couple making love while capturing footage of the Borisogleb Monastery tower in Torzhok, Russia — showing the couple being intimate from a far away angle, before they’re suddenly interrupted by a fellow tourist who walks up the stairs.

The couple can be seen scrambling to stand up as the third person emerges, though they were previously unfazed by the presence of the drone flying nearby. 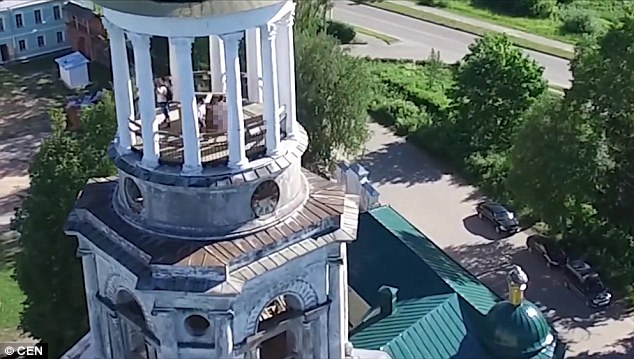 The clip quickly went viral, with some viewers applauding the couple for being adventurous.
Watch the video here:

“There is a German saying: “The listener on the wall hears their own misdemeanors”. In this case, I’d just like to say that these people would have never been seen by anyone if it hadn’t been by someone flying a drone around places nobody could have ever reached before. They did nothing wrong. Good on them, hope they had fun,” one viewer commented on Daily Mail.

“You would have thought, wouldn’t you, that being up there you were safe from peeping Toms,” another added.