Another music icon has left us in 2016. This time, we say goodbye to pioneering rock guitarist Scotty Moore. Moore played with Elvis Presley and undoubtedly helped Presley reach the heights of stardom with his skills. 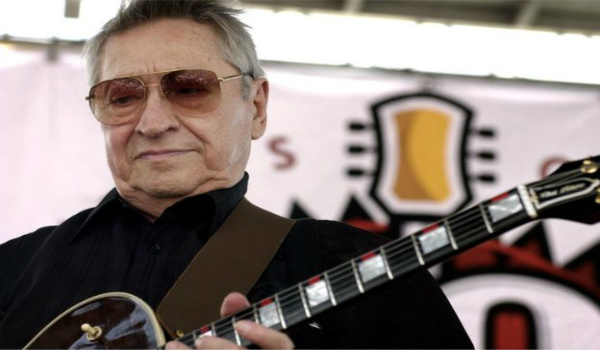 He died in Nashville on Tuesday after several months of poor health.

He is credited with helping Elvis shape his musical sound and inspired generations of guitarists.

As part of The Blue Moon Boys Moore backed Presley on many of his legendary songs including Heartbreak Hotel, Blue Suede Shoes, and Jailhouse Rock.

Keith Richards from The Rolling Stones was one of those inspired by Moore. He once said: “When I heard Heartbreak Hotel, I knew what I wanted to do in life.

Born in Tennessee, Moore began playing guitar at the age of eight.

After a spell in the US Navy he turned to music and in 1954 while living and working in Memphis, he formed the country band The Starlite Wranglers, with Black.

That same year Phillips at Sun Records put him together with a young singer he had auditioned – Elvis Presley.

They worked together for 14 years and Moore was Presley’s first manager.

He was inducted into the Rock and Roll Hall of Fame in 2000 and in 2015 he was placed at number 29 in Rolling Stone’s 100 greatest guitarists list.

Fellow musicians have been paying tribute, with Billy Idol tweeting: “Not many guitarists in R&R were as original and as inventive as Scotty Moore RIP.”

Billy Ray Cyrus tweeted: “RIP Scotty Moore. You will be deeply missed. One thing’s for sure… the King is rockin’ in Heaven tonight!!”

While Richard Hawley posted on Instagram: “Thank you, thank you, thank you Scotty for shaping my universe. What a beautiful noise you made. I hope the train isn’t a mystery anymore. Bless you dearest and greatest of guitar players.”

Matt Ross-Spang, an engineer at Sun Studios, posted on Instagram Moore was “the guitarist that changed the world”.

While it is sad to lose a man of such talent and character, he truly lived a storied life that many could only dream of. RIP and thanks for the memories, we won’t forget you.


Previous OUTRAGEOUS: What Obama Just Did To The White House Logo Will Make You Sick…

Next Obama SUED Over "Shameful Cover-Up" - He Could Lose Everything