This statute that busted this guy has not been used in almost 30 years. AMERICA! 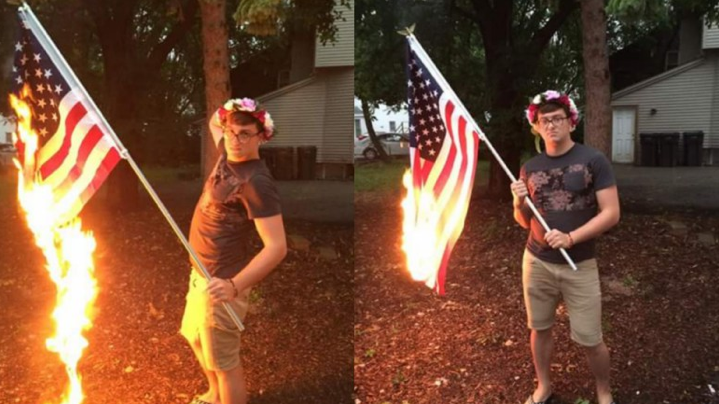 A 22-year-old Illinois man has been charged with desecrating the American flag after he posted photos on Facebook along with messages decrying the state of violence and race in the U.S.

This is the first time the Urbana Police Department has seen the flag desecration statute used in 27 years.

Bryton Mellott was booked into the Campaign County Jail at about 9:47 a.m. Monday after police received numerous calls from citizens concerned about his safety and theirs. The calls started coming in around 7:30 a.m., Sergeant Charles told me over the phone.


The calls prompted the Urbana Police Department to investigate Mellott’s Facebook page, where he had posted photos of him burning an American flag along with the following commentary.

“I am not proud to be an American. In this moment, being proud of my country is to ignore the atrocities committed against people of color, people living in poverty, people who identify as women, and against my own queer community on a daily basis,” Mellott wrote on Facebook in a post. 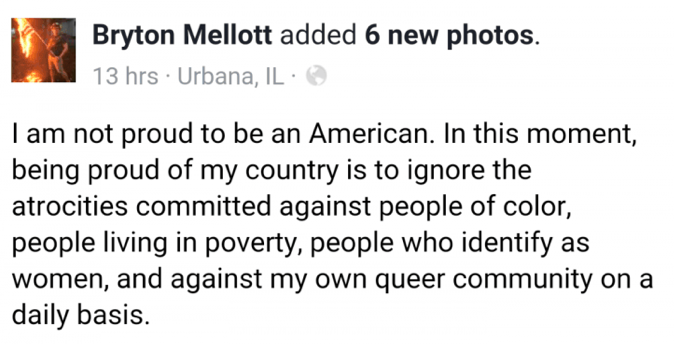 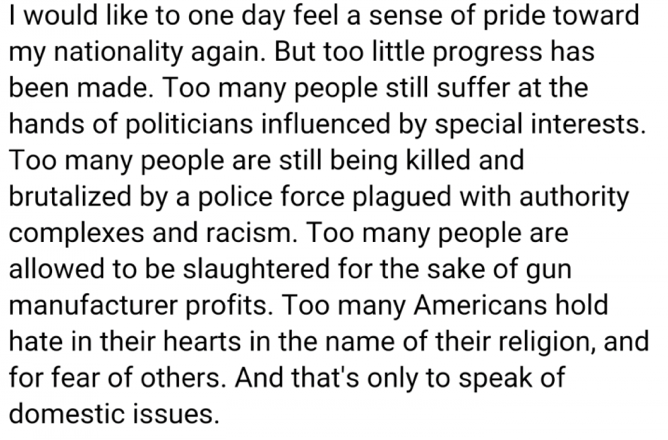 Mellott’s Facebook page also included the name of his employer, which created a problem, Charles added.

“The free speech that he was exhibiting, while it was distasteful to some, free speech is free speech,” Charles told me. “It’s when you say things that are inciteful and make it clear that you are associated with someone that doesn’t share your ideas; it got raised to a level where a reasonable person there would fear for their safety. It’s similar to yelling fire in a movie theater.”

Mellott has been charged with Section 49-1, flag desecration, a class four felony in Illinois, Charles said. He’s also been charged with disorderly conduct, both as an offender and a victim. The reason for both classifications is because police fielded calls from people making threatening calls against Mellott while he himself committed an act that was “causing others to be put at risk of harm,” Charles added.

When Mellott was apprehended this morning, police officers asked him to take down the photos from his Facebook page. Mellott declined. At about 2:30 p.m. today, Mellott’s Facebook page was taken down for reasons unknown at the moment. Charles was also not sure why the Facebook page was removed. Mellott is still in police custody and does not have access to a cell phone.

“I just think it’s an unfortunate situation when freedom of speech issues come into conflict with safety issues,” Charles added. “Concerns have to be balanced. This wasn’t an issue with anyone at the police department being personally offended by his speech. But the reaction that it was gathering, and the concern for the safety of all involved forced us into a reaction.”

Mellott is to be arraigned Tuesday at 1:30 p.m.

From the Lone Star Liberty News Desk
via Forbes

Next The Justice Department May Not Bust Hillary, But WikiLeaks Will - 1,258 Emails Released!