Is the Clinton machine strong enough to stop this one or is it a dream come true?

In a letter to U.S. Attorney Channing Phillips signed by Chaffetz and Goodlatte, Congress asked the court to open an investigation to determine whether Clinton committed perjury:

We write to request an investigation to determine whether Former Secretary of State Hillary Clinton committed perjury and made false statements during her testimony under oath before congressional committees.

While testifying before the House Committee on Oversight and Government Reform on July 7, 2016, Federal Bureau of Investigation (FBI) Director James Comey stated the truthfulness of Secretary’s testimony before Congress was not within the scope of the FBI’s investigation. Nor had the FBI even considered any of Secretary Clinton’s testimony.

Director Comey further testified the Department of Justice requires a criminal referral from Congress to initiate an investigation of Secretary Clinton’s congressional testimony. We are writing for that purpose.

The evidence collected by the FBI during its investigation of Secretary Clinton’s use of a personal email system appears to directly contradict several aspects of her sworn testimony.

In light of those contradictions, the Department should investigate and determine whether to prosecute Secretary Clinton for violating statutes that prohibit perjury and false statements to Congress, or any other relevant statutes.

Thank you for your attention to this important matter. 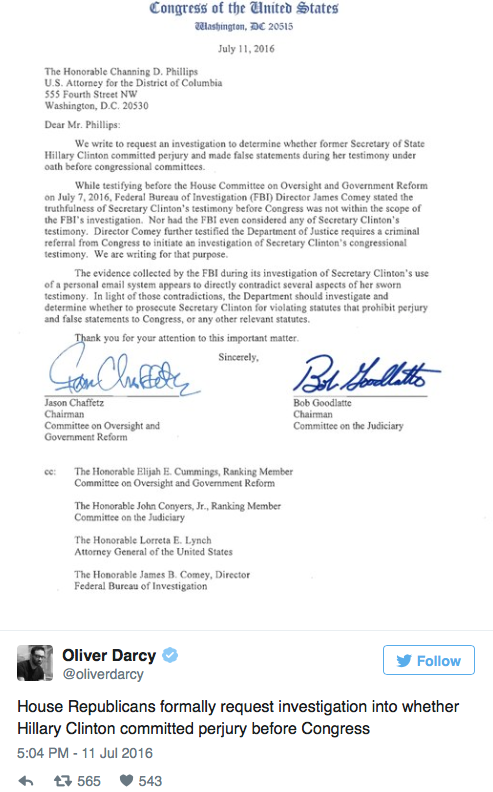 
Previous [WATCH] Alton Sterling's Son, Cameron, Spoke A Message That Blew Me Away

Next Supreme Court Justice Calls Out Trump, But Then Trump Gets Backup From---Ted Cruz?