Does this marijuana legislation concern you? More importantly, does it disturb you HOW CONGRESS DID IT? 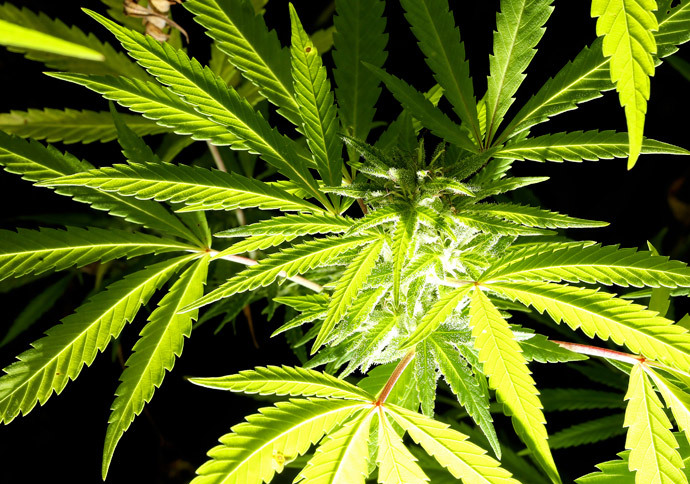 The relevant excerpt of bill H.R. 83 text reads as follows:

“Sec. 538. None of the funds made available in this Act to the Department of Justice may be used, with respect to the States ofAlabama, Alaska, Arizona, California, Colorado, Connecticut, Delaware, District of Columbia, Florida, Hawaii, Illinois, Iowa, Kentucky, Maine, Maryland, Massachusetts, Michigan, Minnesota, Mississippi, Missouri, Montana, Nevada, New Hampshire, New Jersey, New Mexico, Oregon, Rhode Island, South Carolina, Tennessee, Utah, Vermont, Washington, and Wisconsin, to prevent such States from implementing their own State laws that authorize the use, distribution, possession, or cultivation of medical marijuana. Sec. 539. None of the funds made available by this Act may be used in contravention of section 7606 (“Legitimacy of Industrial Hemp Research”) of the Agricultural Act of 2014 (Public Law 113-79) by the Department of Justice or the Drug Enforcement Administration.”

Cassandra Fairbanks, of the Bipartisan Report, notes that “The measure allows states to implement their own policies regarding medical marijuana, meaning the Department of Justice is now barred from interfering with state medical cannabis laws.”


“For a long time,” Fairbanks explains, “the federal government refused to respect the will of the voters in states with legalized medical marijuana, leading to raids and arrests of doctors, growers, and dispensaries.”

This bill was sponsored by Democrat representatives Dana Rohrabacher and Sam Farr. We reported on its passage last year, that was on a temporary basis. But over the summer it was approved over the summer by the House, with 242 votes to 186.

Finally, “the Senate Appropriations Committee subsequently passed the same amendment sponsored by Democratic Senator Barbara Mikulski, by a vote of 21 to 9.”

“The renewal of this amendment should bring relief for medical marijuana patients and business owners,” Michael Collins, Deputy Director of National Affairs for the Drug Policy Alliance said. “For decades Congress has been responsible for passing disastrous drug laws. It’s encouraging to see them starting to roll back the war on drugs by allowing states to set their own medical marijuana policies.”

Earlier this year, two congressmen just filed two separate House Bills on Friday that together would legalize marijuana at the federal level. That means an effective end to the U.S. government’s prohibition policy on the plant.

Representative Jared Polis (D-Colorado) recently introduced the Regulate Marijuana Like Alcohol Act. This Bill proposes just what it sounds like. Marijuana would be legal, but regulated like alcohol. The Bill would completely remove marijuana from the Controlled Substances Act’sschedules.

The Drug Enforcement Administration would no longer have any say or oversight in policing and regulating the plant. Instead, the Bureau of Alcohol, Tobacco, Firearms and Explosives, would handle regulation of legal marijuana in the same way they regulate alcohol.

Representative Earl Blumenauer (D-Oregon) also introduced the separate Marijuana Tax Revenue Act, which imposes a federal excise tax for regulated marijuana. While that might sound like a huge bummer to marijuana users, it provides a big incentive for politicians to make a progressive move on legalization.

States could still enact their own, individual prohibitions, but the federal ban that exists today would be gone.

Four states as well as the District of Columbia have completely legalized recreational marijuana. Washington DC still prohibits the sale of the plant, however. But beyond that, there are 23 states that have legalized marijuana for medical purposes. Proponents of legalization say it is only a matter of time before there is federal legalization… so what better time than now?

“While President Obama and the Justice Department have allowed the will of voters in states like Colorado and 22 other jurisdictions to move forward, small business owners, medical marijuana patients, and others who follow state laws still live with the fear that a new administration — or this one — could reverse course and turn them into criminals,” Representative Polis explained in a statement released on Friday.

“It is time for us to replace the failed prohibition with a regulatory system that works and let states and municipalities decide for themselves if they want, or don’t want, to have legal marijuana within their borders.”

Representative Blumenauer said that the federal prohibition of marijuana has been “a failure” and a profound waste of tax dollars that have needlessly ruined lives.

“As more states move to legalize marijuana as Oregon, Colorado, Washington and Alaska have done,” Blumenauer added, “it’s imperative the federal government become a full partner in building a workable and safe framework.”

Congress is not the only government organization considering the pot issue. USAToday reports that the DEA is considering changes as well:

DENVER — Marijuana users, researchers and investors are eager to hear whether federal officials will remove pot from the same drug classification as heroin, LSD and bath salts.

Federal drug officials say they are considering removing marijuana from what’s known as Schedule 1 classification, with a decision expected this summer.

The current classification makes it illegal to prescribe and declares that marijuana “has no currently accepted medical treatment use,” although 24 states permit some form of medical marijuana use.

Reclassifying marijuana would make it easier for researchers to work with the plant, which is currently subject to strict limitations and officially can be acquired only from a single government garden. Schedule 2 drugs include morphine, methamphetamine and oxycodone.

It appears that marijuana is here to stay, whether we like it or not.