They are trying as hard as they can to deny Trump’s popularity, but these numbers do not lie… 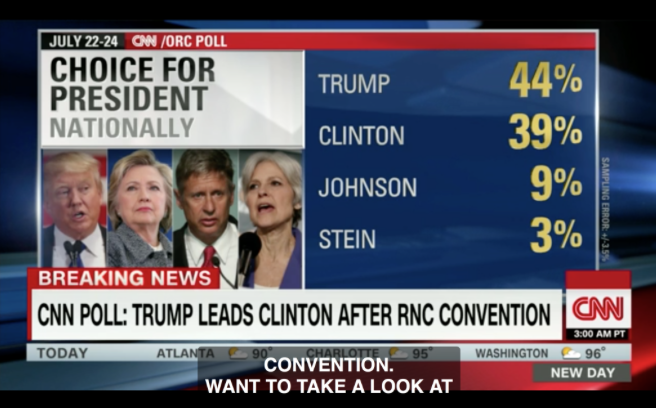 What we had heard, mostly from the media, was that Donald Trump’s convention was all scary doom and gloom that wasn’t going to have mass appeal. Six points and a CNN poll later?

For those of you who can’t be bothered to read two paragraphs (this is the internet after all), the part about there “not being a significant bounce” since 2000 is pivotal…

Donald Trump comes out of his convention ahead of Hillary Clinton in the race for the White House, topping her 44% to 39% in a four-way matchup including Gary Johnson (9%) and Jill Stein (3%) and by three points in a two-way head-to-head, 48% to 45%. That latter finding represents a 6-point convention bounce for Trump, which are traditionally measured in two-way matchups.

There hasn’t been a significant post-convention bounce in CNN’s polling since 2000. That year Al Gore and George W. Bush both boosted their numbers by an identical 8 points post-convention before ultimately battling all the way to the Supreme Court.

The new findings mark Trump’s best showing in a CNN/ORC Poll against Clinton since September 2015. Trump’s new edge rests largely on increased support among independents, 43% of whom said that Trump’s convention in Cleveland left them more likely to back him, while 41% were dissuaded. Pre-convention, independents split 34% Clinton to 31% Trump.

Now, I was talking earlier this week about how surprisingly little of a bump Trump was seeing from the RNC. Clearly I spoke too soon and I readily admit it. Maybe it’s because, despite an incredibly ugly primary (and the whole Ted Cruz controversy aside) this RNC certainly seemed more unified than the DNC can hope to be. Especially given the recent #DNCLeaks and the ire of Bernie supporters. It’ll be interesting to watch for sure.


There could be a multitude of different reasons for this. Maybe people like Trump’s message even if the media doesn’t. Maybe people just hate Trump less than they do Hillary. This could also swing just as far the other way should the DNC go well. Also, don’t forget, Hillary tends to over perform in the realm of debate and she’s the master of the October surprise, so at this point, it’s anyone’s game.

Here’s more from the polls:

Next [VIRAL] This Steak Reveals An Image Of Donald Trump Kissing A Baby - Can You See It?