In three short hours over 170,000 viewers tuned in to view the global premiere of Clinton Cash. Unlike other political videos in the past, this movie is unique, it had viewers from both political parties coming together to watch the film. People have come out and said that they have voted democrat their entire lives until now. This next election will certainly become the season of change for many people going to the polls this fall.

Reaction to the Clinton Cash movie poured in swiftly. Viewers from multiple social media platforms praised the film and urged their followers to watch it.

Many Facebook users expressed a mixture of fury and disbelief at the facts laid out in the 105-minute film.

Here’s what committed Sanders supporters had to say: 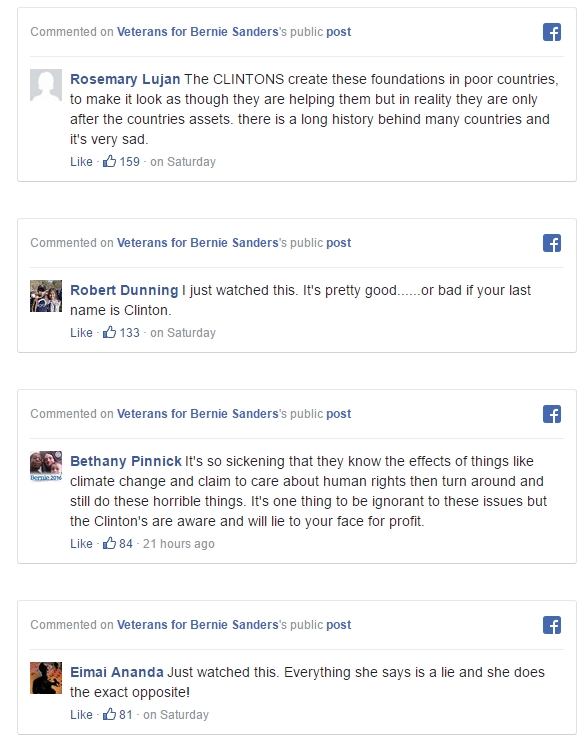 “Clinton Cash feature documentary” was trending on Facebook at the time of publication as reaction to the film continued to accelerate on the platform on Saturday.

One commenter said Clinton Cash “shows the cesspool of corruption that the Clinton Foundation is.”

Another commenter fumed, “Dear God. I thought I was done being shocked by the Clinton darkness. Thank you. Keep speaking out. Please.”

Clinton Cash reveals the disturbing truth about many of the Clinton lies. There are so many, however, that it can’t even begin to reveal all of them. These people are very corrupt they should be in prison, not running for president. Keep the video going viral, spread the news to everyone, we can’t let this evil woman stay inside our white walls, she needs to be behind bars.