Lawful gun owners commit less than a fifth of all gun crimes, according to a novel analysis released this week by the University of Pittsburgh.

In the study, led by epidemiologist Anthony Fabio of Pittsburgh’s Graduate School of Public Health, researchers partnered with the Pittsburgh Bureau of Police to trace the origins of all 893 firearms that police recovered from crime scenes in the year 2008.

They found that in approximately 8 out of 10 cases, the perpetrator was not a lawful gun owner but rather in illegal possession of a weapon that belonged to someone else. The researchers were primarily interested in how these guns made their way from a legal purchase — at a firearm dealer or via a private sale — to the scene of the crime. 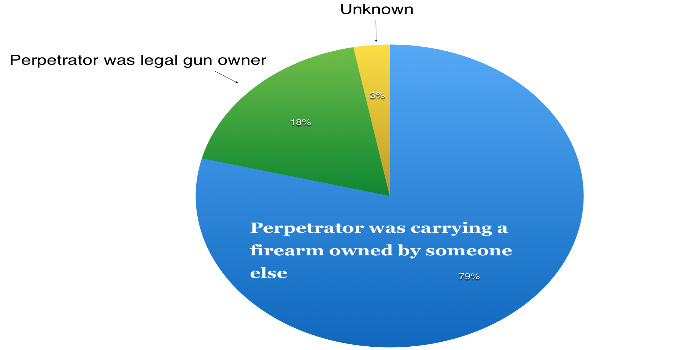 “All guns start out as legal guns,” Fabio said in an interview. But a “huge number of them” move into illegal hands. “As a public-health person, I’d like to be able to figure out that path,” he added.


More than 30 percent of the guns that ended up at crime scenes had been stolen, according to Fabio’s research. But more than 40 percent of those stolen guns weren’t reported by the owners as stolen until afterpolice contacted them when the gun was used in a crime.

One of the more concerning findings in the study was that for the majority of guns recovered (62 percent), “the place where the owner lost possession of the firearm was unknown.”

“We have a lot of people with a lot of guns,” Fabio said, referencing statistics on the large number of guns in circulation. “And some of them aren’t keeping track of them for different reasons — maybe because they have a lot of them and they don’t use them that often.”

A number of factors could lead to legal firearms entering the black market. Owners could misplace them, or they could be stolen — either through carelessness on the owner’s part (leaving a gun in an unlocked car, for instance) or determination on the part of thieves.

It’s also likely that many guns on the black market got there via straw purchases — where a person purchases a gun from a dealer without disclosing that they’re buying it for someone else. This is illegal under federal law. One potential sign that straw purchasing is a factor in the Pittsburgh data: Forty-four percent of the gun owners who were identified in 2008 did not respond to police attempts to contact them.

The top-line finding of the study — that the overwhelming majority of gun crimes aren’t committed by lawful gun owners — reinforces a common refrain among gun rights advocacy groups. They argue that since criminals don’t follow laws, new regulations on gun ownership would only serve to burden lawful owners while doing little to combat crime.