Never assume aspects of an artist’s work are meaningless, especially when it comes to Leonardo da Vinci’s doodles.

Until now, art historians had dismissed some doodles in the leading artist and intellectual’s notebooks. But now, a new study from Ian Hutchings, a professor at the University of Cambridge, proves there’s more than meets the eye. In fact, one page of these scribbles from 1493 actually contained something groundbreaking: the first written account demonstrating the laws of friction.

While common knowledge credits da Vinci with conducting the first systematic study of friction, as the Renaissance inventor incorporated friction into the behaviour of wheels, axles, and pulleys, recognizing its role in limiting operation and efficiency, no one actually knew how he came up with these ideas. But Hutchings was able to put together a detailed chronology that marks the very spot of da Vinci’s “Aha!” moment. 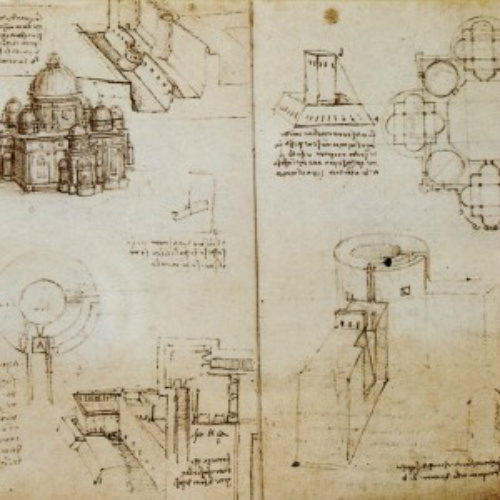 The notebook, which contains the  page of seemingly meaningless scribbles penned in red chalk on a piece of yellow scrap paper back in 1493, is held in the Victoria and Albert Museum of London. The page in question was already the subject of academic debate years ago, regarding, in particular, the faint sketch of an old woman near the top, with the statement “cosa bella mortal passa e non dura,” which translates to “mortal beauty passes and does not last.” Beneath these works lay the sketches that were dismissed by a 1920s museum director as “irrelevant notes and diagrams in red chalk.”

Nevertheless, nearly a century later, Hutchings stirred up discussion on that very page once again, as he discovered that the rough geometrical figures drawn underneath the red notes show rows of blocks being pulled by a weight hanging over a pulley. This is the exact kind of experiment students would conduct today to show how the laws of friction work.