An area of disturbed weather over the Deep South has the potential to spawn the next tropical system of concern for the Atlantic basin during next week.

“Formation of a tropical system will depend on whether or not this disturbance moves over the open waters of the northeastern Gulf of Mexico and spends a few days over the warm water,” according to AccuWeather Hurricane Expert Dan Kottlowski. 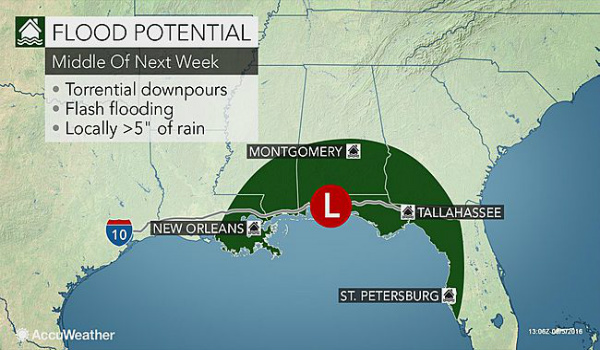 Tropical storms have formed in this manner in the past, but the process can be very slow.

The area being monitored extends from northern Florida to Louisiana spanning Tuesday to Friday. If a tropical storm forms, it would acquire the name Fiona.


Regardless of whether or not a tropical storm develops, light winds, copious amounts of moisture and the disturbance itself will produce rounds of heavy rain through next week.

A slow-moving storm system will deposit locally heavy rainfall over much of the southeastern United States through this weekend.

The disturbance near the Gulf coast will enhance the rainfall beyond the weekend.

Many locations from the southern parts of Louisiana, Mississippi, Alabama and Georgia to northern and central Florida can receive 1-2 inches of rain on an almost daily basis. Much of this rain can fall in an hour or two where thunderstorms develop. Rainfall of this nature can easily lead to localized flash flooding and brief travel disruptions.