A bag used to house the first sample of lunar material collected on the moon by the Apollo 11 spacecraft  is the focus of a legal battle after the government claims they mistakenly sold it due to confusion with paperwork filing after a nasty criminal case against Max Ary, the founder and former director of the Cosmosphere in Kansas.

A bag carried to the moon aboard the Apollo 11 spacecraft and used for the first sample of lunar material is at the center a legal fight after the government mistakenly sold it during the criminal case against the former director of the Kansas Cosmosphere and Space Center.

The white bag — which was flown to the moon on Apollo 11 in July 1969 and has lunar material embedded in its fabric — is “a rare artifact, if not a national treasure,” the government said.

The dispute is the latest legal twist in the case of Max Ary, the founder and longtime director of the Cosmosphere in Hutchinson who was convicted in November 2005 for stealing and selling museum artifacts. 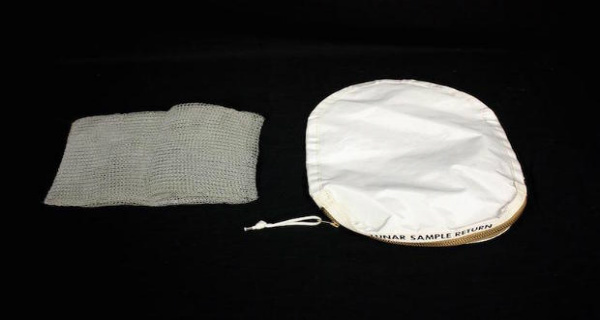 At issue in his prosecution were hundreds of missing space artifacts and memorabilia. Some were on loan from NASA to the Cosmosphere. The lunar bag was discovered in 2003, during the execution of a search warrant in a box located in Ary’s garage.

On Wednesday, the U.S. Attorney’s Office asked a federal judge to set aside the final forfeiture order and rescind the bag’s sale, saying that the National Aeronautics and Space Administration was not properly notified of its forfeiture because the bag was misidentified.

The bag was sold at a government auction on Feb. 15, 2015, for $995 to Nancy Carlson in Inverness, Illinois. NASA learned the Apollo 11 bag had been sold without notice or permission when Carlson sent it to NASA at the Johnson Space Center in Houston for authentication. Carlson separately sued NASA in June in a federal court in Illinois, seeking the return of the bag.

Federal prosecutors want the federal judge in Kansas who handled Ary’s criminal case and subsequent forfeiture to rescind the sale and refund Carlson her money.

Apparently, two lunar bags were confused as one and the same after inventory identification numbers of them were combined on spreadsheets, the government said.

The other bag was an Apollo 17 lunar sample bag that was flown to the lunar surface aboard the Lunar Module Challenger. That bag was sold by Ary at a 2001 auction for $24,150, and it was later recovered by the government during its investigation.

Ary, who was president and CEO of the Cosmosphere from 1976 to 2002, was sentenced to three years in prison and ordered to pay $132,274 in restitution. He has since been released from prison after serving about 70 percent of his sentence.

He has always maintained his innocence, saying he accidentally mixed museum artifacts with ones he collected and sold privately from his home.

Does the woman have a right to keep the property even though the government says it was a mistake and they deserve to have it back, or should the government be out of luck on this one? What do you think?