Photos of four armed French policemen forcing a woman to remove her burkini on a beach have sparked a fierce debate.

The images were taken in Nice on Tuesday, the scene of a deadly Islamic extremist truck attack in July that killed 86 people.

The resort is one of a dozen in France that has imposed the ban over the summer months, with violators risking a £32 fine.

But the spectacle of a lone woman sitting in the sand as four armed men dressed in black loom over her has struck a nerve, with many drawing comparisons with a nun’s habit:

There are people behaving inappropriately on this beach & the woman isn't one of them pic.twitter.com/4HJLEkvZH1

I wonder if France would make these ladies take their clothes off too. #BurkiniBan pic.twitter.com/PP6EIWlaoZ

I don't care how you feel about the burka, this is anything but Liberté, Equalité, Fraternité #BurkiniBan pic.twitter.com/t1OLFt1v4z

Replace "secularism" with "Islam" and this, of course, sounds like Saudi Arabia. https://t.co/yOEWg11Ugh

In a recent turn of events, an Inman is calling for nun’s habits to be banned now too.

Izzeddin Elzir, the imam of a mosque in Florence and the president of Italy’s Union of Islamic Associations, has been posting pointed photos of nuns wearing habits since the controversy began.

He said: “I didn’t write a single word on the photo. The image of the sisters at the sea speaks for itself.” 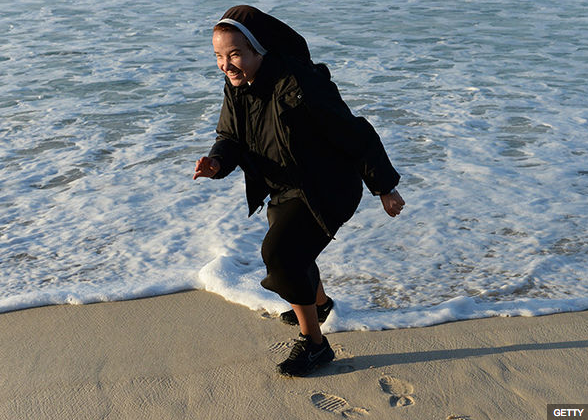 Italian beach communities were stunned by his suggestion.

Marco Beoni, a barista in a seaside town near Rome, said: “We have nuns on the beach all the time. They go in the water in their skirts and sit on blankets just like everyone else.

“Who cares what they are wearing. What’s the problem?”

Imam Elzir’s suggestion is all the more bizarre given the Catholic Church in the area has actually made clear its support for the burkini.

Considering that nun’s have not been involved in any violent crimes I do not see why this request is being questioned. If they do not like it then they should be speaking out against these atrocious acts.  Instead, these devout Muslims cling to a religion that calls for the deaths of innocent people that simply do not agree with them.

Next Facebook Already Knows Who You Will Vote For This November