Police officers have gotten a really bad rap recently, thanks to the Obama Administration’s race war and the media’s false narrative that cops have a penchant for excessive force.

So, when we have a chance to report stories like this one, it’s a real pleasure, because they show a much softer and endearing side of our nation’s law enforcement.

When a 1-year-old infant was found covered in bile after his mom was busted for DUI, kind West Virginia state troopers stepped up to help him.

Trooper B.R. Wood and Senior Trooper D.C. Graham of the West Virginia State Police Princeton Detachment rescued the baby boy from his mother’s car and brought him to their headquarters.

“The baby was good as gold,” Wood told InsideEdition.com. “He was laughing and playing when we got to the office.”

Due to the car’s terrible condition, Graham bathed the baby in a small sink inside their office and towel-dried him. A photograph captured the sweet moment.

“We always have teddy bears in the office,” said Wood. “[The baby] played with the bear and even fell asleep when Child Protective Services had arrived.”

Wood said the baby is currently under the CPS’ supervision and is safe from harm. 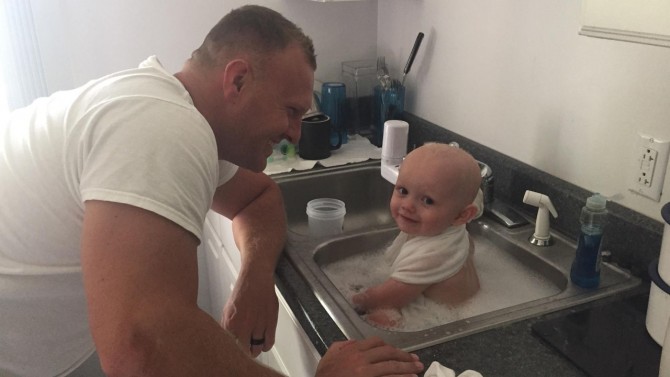 Share this report if you commend the sincere compassion these two troopers showed this little boy, who undoubtedly needed their act of kindness very much!

Next Pence Drops 9-Word Truth Bomb About Hillary - This is Why Trump Picked Him!