“Look, Hillary is in hiding and Donald Trump is everywhere,” he said. 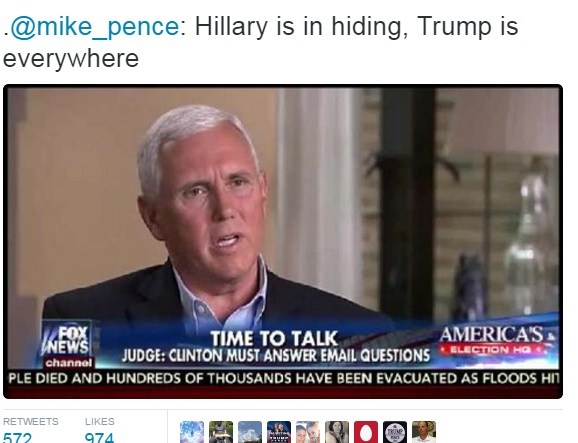 “Look, Hillary is in hiding and Donald Trump is everywhere,” Pence said. “I mean look, I think she has gone more than 250 days without a press conference and you know, it is time for her to step forward and begin to answer these questions. And not just these questions, but questions about the Clinton Foundation. Now we hear the Clintons are going to stop fundraising for the Clinton Foundation if she is elected president presumably because that would be a conflict of interest. Well, the American people wonder why wasn’t it a conflict of interest when she was secretary of state, the third-ranking constitutional officer in charge of our foreign policy?”


Previous Cop Finds Mistreated Baby, What He Does Next "Isn't in the Job Description"

Next WikiLeaks Releases Email on What Hillary Did With Huma - Humiliating!