Colin Kaepernik, the quarterback for the 49s, caused an uproar recently when he refused to stand for the National Anthem at a football game, claiming that because America oppresses black people, he won’t recognize the country.

Ben Carson, the famed retired neurosurgeon and one-time candidate for the Republican presidential nomination, issued a sharp retort to Kaepernik over his actions, blasting him for claiming the very country that pays him millions of dollars is somehow racist, Fox News reported.

“(Colin Kaepernik) disrespected our national anthem and our flag after so many people have sacrificed so that he could have the freedoms that he has today so that he could make a very, very good living in this ‘racist’ land,” Carson told the network.

Evidently many Americans agree with Carson’s statement. A picture of Carson’s quote was shared on Fox News’ Facebook page and as of Monday afternoon had attracted more than 200,000 likes. 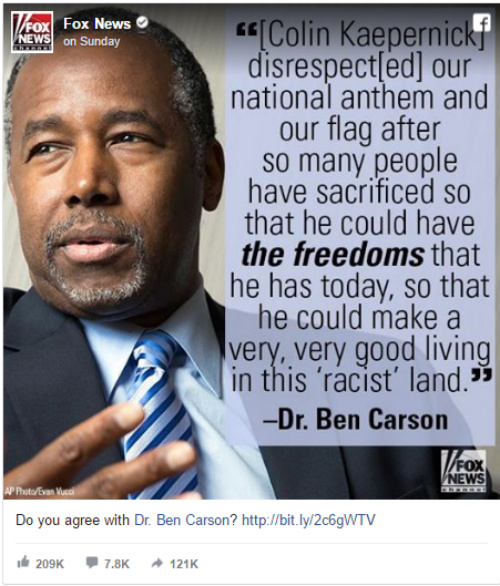 If Kaepernik thinks that America is some evil oppressive state, than he is free to leave this country at any time and go live in Russia or China or somewhere else that might be more in line with his beliefs.