You can always count on Milwaukee Sheriff David Clarke to tell it like it is. He doesn’t care who you are – if you disrespect America and the values our country holds dear, he will call you out. Doesn’t matter if you’re a famous movie star, a popular athlete, or a Regular Joe.

So it’s no surprise that Colin Kaepernick is the latest suspect to catch the wrath of America’s Sheriff.

“This idiot makes millions talking about ‘oppression’ while working for a capitalist profit entity called the NFL,” Clarke tweeted. 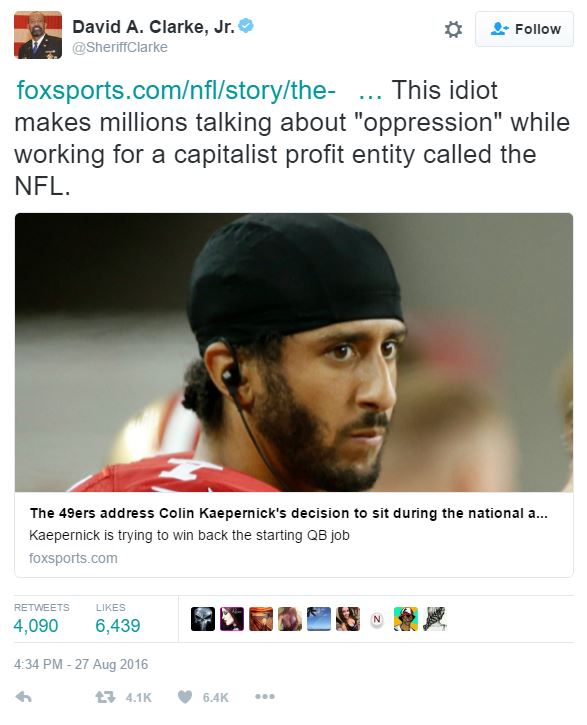 When asked about his actions he told NFL Media, “I am not going to stand up to show pride in a flag for a country that oppresses black people and people of color. To me, this is bigger than football and it would be selfish on my part to look the other way. There are bodies in the street and people getting paid leave and getting away with murder.”

He bitches about the police shooting black people but THESE BLACK PEOPLE ARE COMMITTING CRIMES! And they don’t obey the law or the orders to drop their illegal firearms. The vast majority of shootings are completely justified.

So, go suck rocks you ungrateful pile of crap.

If you hate America then get the hell out.

You are a crappy quarterback and are HATED by MILLIONS.

Couldn’t have said it better myself!

Next John Kerry Would Rather The Media Didn't Cover Terrorism, Here's Why...