I know that when Coca-Cola was an up and coming beverage company back in the 1800’s they incorporated cocaine into their soda. That of course changed and was switched to caffeine after discovering the many dangers of cocaine. It has been that way ever since. Ironically  just the other day a HUGE amount of the illegal substance was discovered in a Coca-Cola factory in France. It was sent as a shipment from South America with orange juice to the factory.

According to The Blaze:

Workers at a Coca-Cola factory in France were shocked to discover $56 million worth of cocaine in a shipment from South America, according to the New York Times.

Employees at the factory promptly notified local authorities about their discovery, and an investigation is underway, the BBC reported.

According to the Associated Press, the cocaine was discovered in a shipment of orange juice from Costa Rica. Authorities found 370 kilograms, approximately 815 pounds, of cocaine. 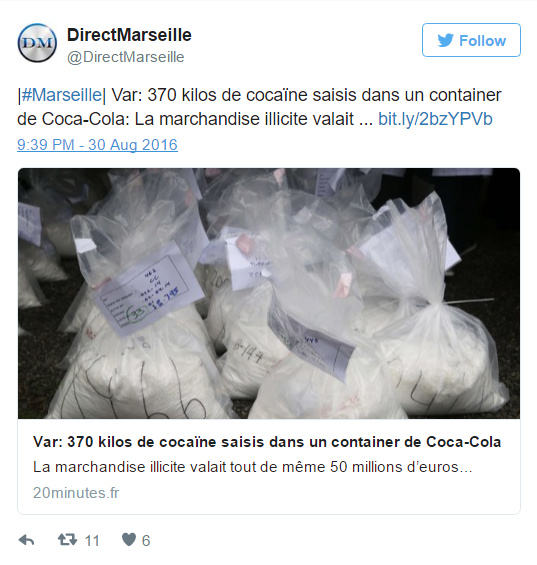 “The first elements of the investigation have shown that employees are in no way involved,” Jean-Denis Malgras, the regional president of Coca-Cola, told local news website Var-Matin, according to the BBC.

The AP notes that coca leaves were reportedly used in the original formula for Coca-Cola in the 19th century, although the company maintains that cocaine has never been an “added ingredient.”

Someone in South America is very upset right about now, and someone is in ALOT of trouble. Whoever created the mix-up… good luck!