Muslims in Owego, New York caused a major uproar over two words on a 9/11 memorial constructed in their town. Unfortunately for them, the community gave them a dose of reality

According to Mad World News:

The Muslims believe the words “Islamic terrorists” appearing on the monument could encourage hatred towards Muslims living in the city, so they want them changed as not to “paint all Muslims with the same brush.”

The Muslim group launched a push for the monument’s description to just read, “terrorists” or even “al-Qaeda terrorists.” 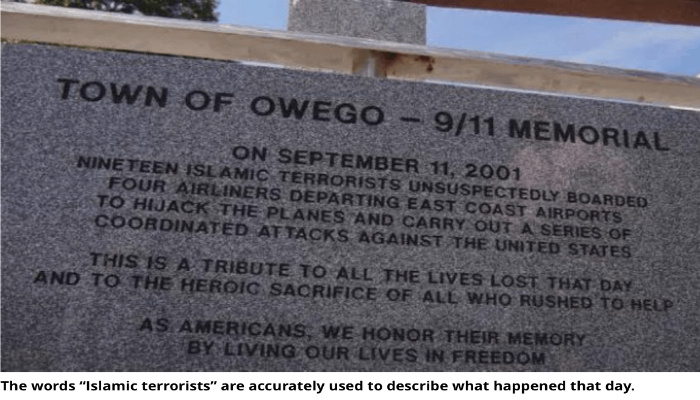 However, Owego Town Supervisor Donald Castellucci just gave them a rude wakeup call when he told them that his town “doesn’t whitewash things” and that the monument is accurate in its description of those responsible for the attacks.

“I don’t live in a politically-correct world,” Castellucci said. “I live in a historical fact world and cross terrorism, whether it’s American homegrown, Christianity, Islamic, you call it what it is.”

The town made the right call in this situation. There is no reason to sugar coat the truth. Unfortunately for those that disagree are just gonna have to  deal with it.

Next Hillary Too Exhausted to March in Labor Day Parade: "It's Just Too Much"