Gourdin, a Utah native, became the subject of heated controversy when she posted photos last week to her Facebook account of a giraffe, wildebeest and zebra she killed on an African safari. 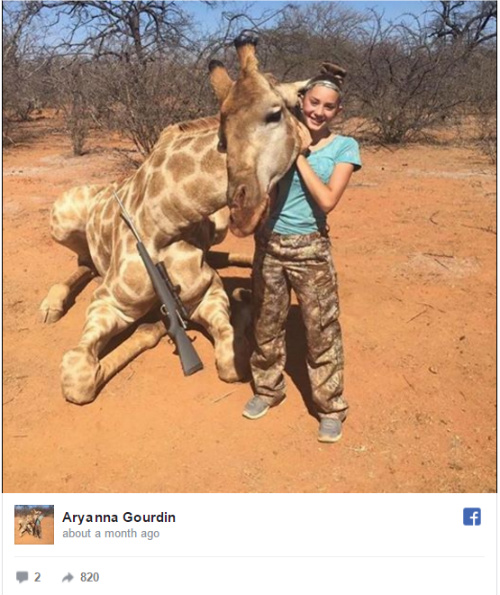 “How would you feel if I came to your house one day, and I hunted down your pet cat, and I killed it and I then posted pictures of me celebrating the slaughter of your pet cat?” Morgan proudly asked the young girl.

The pre-teen trophy hunter — clearly agitated by the question — struggled to find an answer, so her father stepped in, telling Morgan he was asking a “trick question” because the giraffe was not his pet.


Regardless, the British anchor stood his ground. He said his inquiry is legitimate because he noticed a “weird situation” on Gourdin’s Facebook profile in which she has pictures of her kills as well as photos of her pet cat.

“I’m not allowed to have pets because I hunt?” Gourdin chimed in.

But Morgan remained steadfast in his line of questioning, asking the 12 year old if she would “like” if he killed her pet cat and “celebrated” it. The father again told Morgan he and his daughter “would never kill somebody’s pet,” calling the very suggestion “derogatory.”

The host did ultimately admit he’s “sure they wouldn’t kill a pet but if they did they would do it with remorse.”

Earlier in the interview, Gourdin told Morgan she enjoys hunting because it’s a tradition that has been in her family for many years, adding, “I really enjoy the taste of the meat we kill.”


Previous Mom Admits She Sleeps Naked With Teen Son, Doesn't Get the Response She Desired

Next Couple Thinks Their 9/11 Costumes Would Be Funny, But Social Media Disagrees