When Donald Trump stopped in Detroit this weekend to speak at the Saturday worship service at Great Faith Ministries Church, the camera crews weren’t far behind. They closely followed his every move in hopes of capturing the moment the “racist” candidate would slip up among the black community.

But that didn’t happen.

In fact, what actually happened was the exact opposite of what they all wanted.

The congregation of African American Christians gave Trump a standing ovation after he promised to address their concerns as President of the United States, calling their community “one of God’s greatest gifts to America.”

Pastor Jackson then came on stage and publicly gifted Trump with a Bible. He also wrapped him in a stunning white prayer shawl and blessed the Republican nominee. 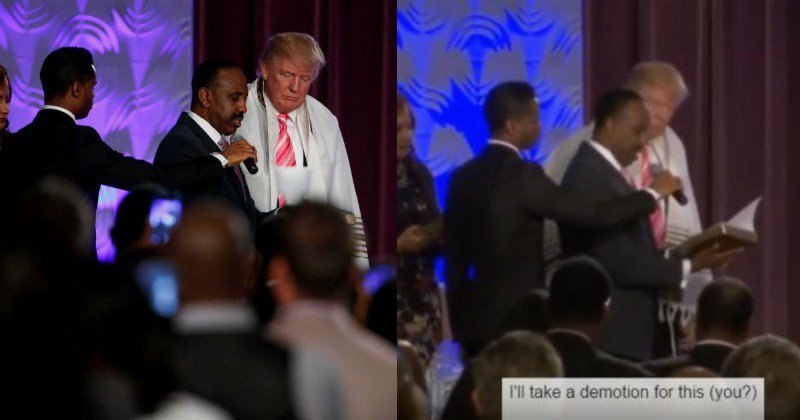 Reuters instructed their cameraman to cut away when the touching moment unfolded, but moved by the unity between the two races on stage, the cameraman refused, saying, “I’m not leaving. I’m shooting this, I don’t care what… I’ll take a demotion for this.”

If this doesn’t prove that the mainstream media is biased, I’m not sure what it’s going to take to convince you. The news crews following Donald Trump around this weekend had high hopes of portraying him unfavorably, and when he defied their expectations, they tried to cover up the truth.

Meanwhile, those in the media who question Hillary’s obviously failing health and her decades-long history of lying are getting fired from their jobs.

Reuters ultimately ended up cutting the cameraman’s footage for their final broadcast, but the fact that he was willing to take a demotion in order to do the right thing is commendable. Share this report to give him two thumbs up!

Next Bully Demands Cash, Learns Painful Lesson When His Face Springs a Leak